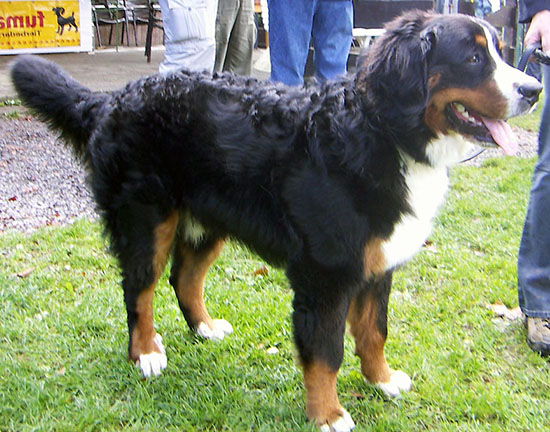 This dog comes from Switzerland. In our country, he is briefly called the Bernese Mountain Dog.

Tail. Profusely hairy and not curled.

Robe. Soft, straight and long, also a bit wavy, but not curly.

Ointment. Obligatory shining black with a shining yellow-red mark on all four limbs, cheeks and above the eyes. Little white mark on the head, white breast.

Not absolutely required, but desirable: a small white patch on the nape of the neck, white paws and the tip of the tail. If the white markings are large, white baldness between the eyes is also required, because if it is missing, the expression on the face becomes too gloomy.

Switzerland reported two more related races: appenzeller (reg. FCI 46a) i entlebucher (reg. FCI 47a). Both of these dogs are similarly built and have the same mental characteristics. They practically differ only in height, because the first is 48-58 cm, and others 40-50 cm. The vestigial tail is a distinctive feature of the entlebucher, while the appenzeller has a long tail, like all other Swiss races. Coat and color like a large Swiss Mountain Dog.

The patterns are not given, because they are rare outside of Switzerland. Initially, and in their homeland, they were considered rural mongrels, and only from some 30 years have gained a place in sports cynology. However, they are not very representative and probably will not arouse much interest.