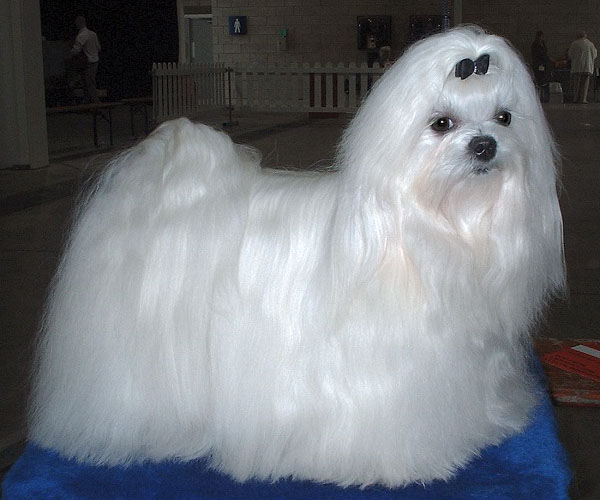 It is probably the oldest lapdog, already known in ancient times in Greece and Rome, where he was very shadowed. It requires great care in maintaining a silky robe. In addition, the salon lifestyle influenced his elimination. I present the pattern in a nutshell.

General impression. Little dog, with a body slightly longer than the height at the withers, covered in abundance, shiny, long, white hair. It is the epitome of an elegant luxury dog. It should be alive, intelligent and easily attached to his master or rather lady.

Head. Not very narrow, length up to 6/11 height at the withers. The face part is clearly shorter than the brain part of the head. Forehead profile line parallel to the straight line of the bridge of the nose. The leading edge is very clearly marked, emphasized by the eyebrows and supraocular arches. Skull slightly ovoid, with a very faint marking of the back of the head (the width is almost equal to the length). Large nose with tight nostrils, completely black; his back is covered with long hair, indistinguishable from the hair of the beard. Rather tight lips, black, covered with abundant hair.

Neck. No skin folds or dewlap, desirable arched and worn like this, as if she had been thrown back.

Torso. Much longer (by approx 6 cm) from the height at the withers. The ratio of length to height as 138 : 100. The chest is large, deep, rounded, roomy. Withers slightly bulging. Straight back. Loins: Strongly muscled and broad. Belly slightly tucked up.. Croup wide, gently sloping.

Front limbs. Shoulders move freely. The upper arm is slightly longer than the shoulder blade, positioned to it at an angle of 70 °. The forearm is vertical and dry. Elbows properly positioned. Pasterns and wrist are straight. Rounded feet with tight and arched toes. The skin on the soles and toes is highly pigmented and the nails are black or at least dark. The whole limb is very hairy all the way to the feet; the hair is pressed between the fingers.

Tail. Fat, arched from the base above the croup, very hairy (the hair falls on one side, resembling a weeping willow and reaching the hock joint).

Robe. Thick cover hair, shiny, very long, silky and simple; desirable as long as possible. They should cover the entire dog and hang down like a shiny cloak adjacent to the figure, but no strands or tufts. The Maltese robe is not lined.

Code. Typical fine, quick jog; it should not resemble the gait of a Pekingese.

Disqualifying Defects. Ointment other than white, even small spots. Undershot. Curly hair. Exceeding the height of 2 cm or height lower than required by the standard. An eye like a jackdaw. No tail, lack of eye pigmentation, cryptorchidism. Nose color other than black.

Pattern entered in the FCI register under the number 196

He is undoubtedly the closest cousin of the Maltese, with which he was often identified, until this race was established. It differs from the Maltese in a slightly larger format (however not higher 30 Cm i 5 kg) and a curly coat.

White ointment, sometimes with undesirable, but with an acceptable yellow bloom. Not bred with us.

Volpino italiano (FCI 195). It is small (do 30 cm) white peasant spitz, not found outside of his homeland.