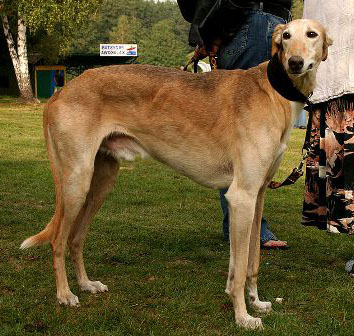 This breed undoubtedly existed as an endemic variety in the eastern territories of the former Republic of Poland, which ruled in the 16th century Transnistrian Ukraine to the Crimean Khanate, and this range continued until 1772 year (1st dismantling). Mentions have survived, and even engravings conveying the hunting traditions of those times. Unfortunately, these mentions do not allow for the reconstruction of the pattern. Probably the hunters of that time did not pay much attention to it, what we call exterior today, but they were limited to demanding speed and quickness. So the purity of the breed was certainly not taken into account (the term was still unknown at that time), but it was included in their own kennels whether it was acquired, whether bought or donated Tatar and related dogs of eastern breeds or varieties.

The first known description of our greyhounds appeared in 1823 r. in the third volume of Sylvanas”, I owe this discovery to associate professor dr. have. Maciej Mroczkowski and his article are quoted: ,,Turkish greyhounds, very rare in our country, they give way to other tribes for courage, perseverance and even loyalty. They are similar to our domestic ones in shape and size, but their head is unequally shorter, they are almost completely naked; they rarely bark with a weak voice. Their skin is oily and gives off an unpleasant smell. Italian Greyhounds are slender, they have short and smooth hair.

There are slight differences between the Scottish Hound and our Polish. They are longer than Turkish Greyhounds; they have a tail that is more curved upwards, the ears are half-hanging and quite short. From thicker members and other parts they seem to have greater strength and courage; and being clothed with long and thick hair, they are impervious to all kinds of air and very persistent on the run.

Wanting to have good young greyhounds, absolutely necessary, that nests may come from good, it is to their parents, or old greyhounds, they already had all the qualities, which after this variety they require. For these items result more from birth than from education and learning. So greyhounds, by nature, have to blind well, that is, to have keen eyesight, chase well, that is to show power and handiness; to be passive, it is an animal to skillfully catch. These three principles are their chief attributes, which rely partly on the build of the body.

The Greyhound is well built being tall, taking care from the front claw all the way to the top of the head about 3 feet and 6 cali, long and from the end of the mouth to the end of the tail on 4 feet 2-3 inches. His head is small, with a flat crown on the forehead, convex back part of the head, long muzzle, a little bent at the front, but not very pointed, like a pike, wide open, fitted with sharp and strong teeth, otherwise he would not be passive. His eyes are merry and prominent forward, which rarely closes, narrow ears, short and half pendulous. The body is long, slender, briefly. He is busty, with a long neck, with a broad and slightly humped back, and with deep sides. The legs are flat, long, muscular; short thighs. flat shoulders, skinny and heavily wiry shaves, hocks short with hard appendages under the big toes; fingers not separating, thin; curved claws. Long tail thinner towards the end and curved upwards.

Greyhound hair comes in a variety of colors: they tend to be fawn in color with a white throat, they are also completely white or black, mottled and brown.

The above-mentioned size is not without exception, for they are far greater, they are also unequally smaller.

Greyhounds have a small smell compared to other dogs, which is probably the reason, that they don't get much attachment to people. They don't show much of a clue either, but the destiny of a greyhound does not require much either. With these qualities there should be a dog and a bitch. The last one is not meant to be young, nor the old one, but in the third piss, this is 4 years old, the best, when it spins in the spring”.

Further references to these dogs can be found in the book by Stanisław Rewienski, which was released in the year 1893 by Gebethner and Wolll.