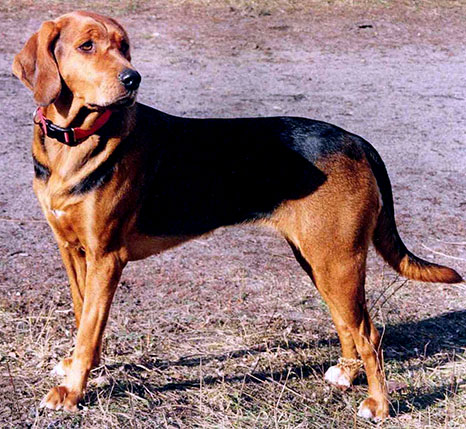 In the old days, the Polish hound was also known outside its homeland. The oldest monument of cynological literature in Poland is also devoted to him, “Hunting with hounds”, whose author, Poznań Voivode, Jan hr. Ostroróg, released in the year 1608 the first book on hunting cynology. Unfortunately, it only describes the functions, and does not provide a description, which would reconstruct the pattern. (Further editions 1618, 1643, 1649, 1797, 1859 and 1901).

Laska also took care of the hounds, especially eastern, including Polish ones, describing them exhaustively in his book "Bracken des Ostens”. This author, using the rich Russian literature, he carefully noted the data on the Polish Hound. It is necessary to conclude from its description and the attached illustration, that the Polish hound was a derivative or related form of the dog of Saint Hubert, which has given its mark to the French hounds since the Crusades. It will be difficult to reconstruct roads today, which the dog got to Poland. The chick considered this breed to be dying out at the end of the last century, despite its highly valued hunting qualities. In addition to the large hound, he describes several smaller varieties, lighter, black and tan, red or yellow with white spots, and also rough-haired (the influence of the original sheepdog), finally, a variety of the light hound, fast runner, close to the pointer. The smaller ones were characterized by a high-pitched jaw, sashant.

In the post-war period, Colonel Pawłusiewicz collected the remains of the hounds remaining in Poland and we owe him, that there were several fairly even representatives of this breed at post-war exhibitions. One should wish, that these efforts with the support of the Polish Hunting Association contribute to the popularization of this native breed.

Our breeding also includes hounds from Lithuania or Belarus (type of Russian hound). These dogs, brought by Colonel Kartawik to Wrocław, are also to contribute to the reconstruction of the Polish hound.

Approaching the issue objectively, it should be stated, that the former Polish hound was lost,, and now we are on the way to its reconstruction. The Kennel Club in Poland established its standard designed by Eng. Jerzy Dylewski, which was entered in the year 1966 to the FCI register.

The lower jaw is well muscled. The length of the brain is equal to the length of the muzzle. The front line with the line of the muzzle form an obtuse angle. The browbones are strongly developed; forehead with significant wrinkles. The occipital bone is clearly marked. The frontal breakthrough is clear. Slanted eyes, not too deeply set, dark brown. Mild expression, satisfied. Lower eyelids in older dogs are pendulous. Ears set low, quite long, loosely hanging, slightly rounded at the bottom. The lower parts of the auricle curl towards the center, tightly fitting to the cheeks.

Neck. At the root of considerable thickness; strong, muscular, the average length. Pendulous jowls, with lots of skin folds.

Torso. The chest is large, reasonably wide and deep. The front chest reaches the elbow. Ribs well sprung, long, as well as the entire chest, more upright than other breeds. Long back, wide and muscular. The cross is not sloping, wide. Big belly, capacious, almost the same depth as the chest. Sides filled, rounded, with as short and as little fluff as possible.

Tail. Rather low set, fat, covered with longer hair on the underside, goes down to the ankle joint. Slightly pendulous, slightly bent from the middle of the lower leg. Raised slightly upwards in free movement, but not wrapped. Slightly weaned during the chase, hangs below the level.

Hair. The average length, to group, with dense lining, slightly longer at the nape of the neck, the back side of the hind legs and on the underside of the tail.

Ointment. Tan head and ears, except for raids on both sides of the head; ears darker. Limbs and abdomen also flamed. Black or dark gray torso. Tan essentially yellow of varying intensity, up to rusty cinnamon, the most valued. White arrow allowed across head to nose, on the chest and at the tip of the tail. Black saddle pad, overlapping the head. Marked spots above the eyes of a tan color.

Chody. Usually tiny, slow, ociężały trucht. During the hunt, the hound searches and chases in a heavy gallop.