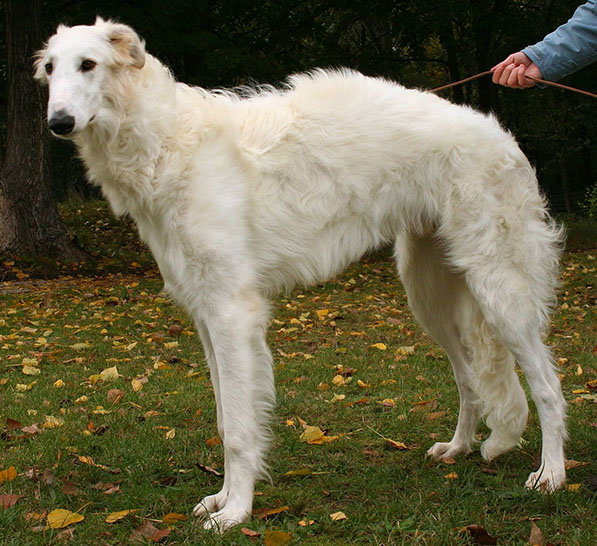 The revised standard entered in the FCI register under the number 193b.

This breed belongs to the group of eastern or Asian greyhounds. In Russia to this day it is kept and bred mainly for hunting purposes to chase hares and foxes., and also behind the wolves in the steppes. There, too, one should look for suitable specimens. In the countries of Western Europe, Czech Republic in Hungary they participate in races for artificial hares. This breed was created from the crossing of an old Russian greyhound with Crimean and mountain sighthounds.

General impression. Impressive size, rich robe, beautiful color, alignment in proportions, elegance and harmony of the figure i. movements, which gives the whole a mark of undeniable nobility. He is distinguished by gentle calmness and restraint as well as self-confidence. He is fast and persistent in the pursuit. In combat, he can become a dangerous opponent, because despite appearances, he is strong, primeval dog eager to fight. In Russia it is used in hunting; has excellent eyesight, high speed, especially at short distances and with sharpness to predators.

Head. Viewed both in profile and from above - long, narrow, dry and delicately sculpted, tapering evenly to the tip of the nose. Its length and width should be in proper proportion to the length and slenderness of the limbs. The length of the muzzle is slightly longer than that of the brain. Particularly characteristic is the profile line of the bridge of the nose and the skull cover, which, due to the lack of a leading edge, create a very obtuse angle (almost close to a straight line.) at the height of the flat epochal arches. The cerebral part is flat, slightly sloping towards the rear, with slight zygomatic gaps, narrow. The occipital tumor is pronounced. Dying silna, long, narrow, dry and not deep. The bridge of the nose is slightly arched and straight. Lips thin, search, they stick tightly to the teeth and their sides are darkly pigmented. The relatively large front surface of the nose protrudes significantly above the incisors and is always black regardless of the color. Complete dentition, black, strong, with a scissor or forceps bite. Due to the length of the jaws, the teeth are far apart. Large almond-shaped eyes with an iris as dark as possible (chestnut brown). Set quite close to each other, slightly beyond half the length of the head. Mild expression, but alive. The eyelids are slightly oblique and black pigmented. Ears set high and far back, relatively small, thin and narrow, tapering to a point. Quietly folded back towards the neck (rose petals), the spitz can lie close to each other. Excitedly raised, the pointed ends usually broken forward.

Torso. Withers not very pronounced. Chest relatively long and very deep (reaches to the elbow), but relatively narrow and flat (ribs slightly sprung). Forechest not expressive. The lower line of the chest forms an arch. The back forms a flat arch, the peak of which is located on the border of the chest with the loins. In a bitch, the contour of the arc may be flatter. Thoracic section almost equal to the lumbar section. The entire ridge, especially, however, the lumbar region is relatively broad and very muscular. The belly is very tucked up and underdeveloped. Back long, broad and strongly muscled, forming an extension of the back, it falls harmoniously backwards. Pelvic cruciate tumors should be at least a hand spacing (ok. 8 cm).

Front limbs. The whole thing is long, dry, muscular and seen both from the front and the side - straight. The whole set is relatively steep. The angles of the shoulder and elbow joints are strongly obtuse. Individual members, especially a break, considerable length. The length of the forelegs is approximately half the height at the withers. Long shoulder blades, narrow, relatively steep, with dry muscles. The upper part of the scapula does not generally protrude above the spinous processes of the thoracic vertebrae. Long arm, relatively steep with lean muscles. Backward elbows do not dare to stick out too far from the body, but not. should fit too closely to it. The forearm is particularly long and vertical. Narrow at the front, on the side - seems wide due to lean muscles, on the back decorated with a feather. The wrist is strong and only slightly angulated. Pasterns relatively short, it should not be completely vertical. Paws parallel, narrow, oval, with arched and tight toes, claws and pads strong, well pigmented.