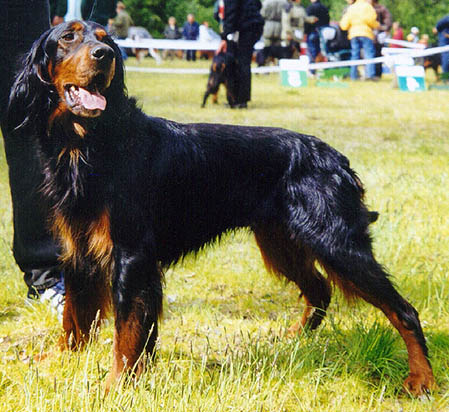 The origins of this breed are also unknown. She was probably native to Scotland with this, that in the late eighteenth century the Prince Gordon's kennel supposedly contributed to the leveling of the type; hence its original name. English authors speculate, that apart from native dogs of the Setter type, the bitch contributed to its creation ,,Maddy”, black and tan collie. It seems right, because the Gordon's disposition differs from that of an ordinary English pointer. English hunters, especially professional managers, they prefer a dog that is not attached only to one master, but spending his life in a playpen. Thanks to this, after training, they can be used by everyone, it will buy them or lead them out of the field. The Gordon Setter, on the other hand, hates pen breeding; on the contrary, it requires constant contact with people. This quality of his undoubtedly contributed to it, that in England he is much less represented than other breeds of Setters or Pointers. The same feature, however, should contribute to increasing its popularity with us, where, after all, hunters usually keep only one dog and do not hide it in a pen, but admit to the domestic community.

Of all the English pointers, the Gordon has the most features of a versatile dog. That's probably why, that among his ancestors there would certainly also be a mountain scream (bloodhound), whose features are revealed more clearly in some examples of this breed. Unfortunately, the stock of this breed in Poland is currently rather weak. Our dogs are more like "black irish."” than a proper Scot and therefore it would be advisable to import a perfect stud dog or - which is much cheaper - to send Polish bitches to mate with it abroad

General impression. Stylish dog, building a gallopen, with a noble figure, resembling the build of a strong hunter (hunting horse - ed. Or.), harmoniously built and well balanced. Powerful, quite short, with an even back. The tail is quite short. The head is quite long with clear lines and an intelligent expression. Long coat, flat with strong colors.

Head. Rather deep than wide in the cerebral part, but clearly wider than the muzzle, arched, the widest between the ears. The leading edge is clearly marked, the distance between her and the poll is slightly larger, than separating it from the nose. A slender head below and next to the eyes, and cheeks as narrow as her slenderness allows. The muzzle is quite long, with almost parallel lines of the forehead and bridge of the nose, viewed from above and from the side, not pointed. Lips not pendulous, but well marked. The nose is large and broad, black. Nostrils open. The depth of the muzzle is slightly less than its length. The eyes are quite large, not too deeply set, nor too convex, slightly covered with eyebrows, expressing cleverness and intelligence. Dark brown, shiny. Ears set low and close to the head, medium size, delicate, with thin skin. Equal snout, Undershot or undershot bite unacceptable.

Neck. Long, slim, bent at the head, no trace of dewlap.