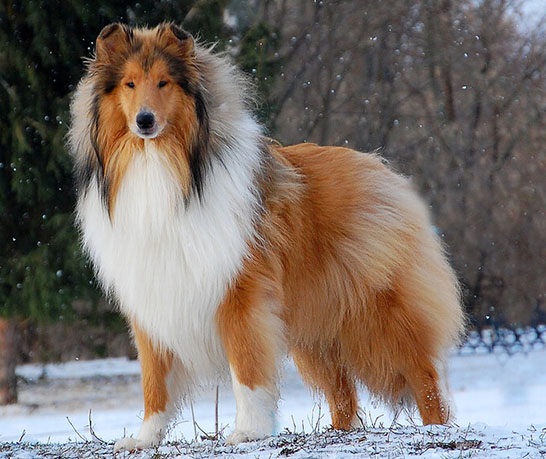 Continental sheep dogs "grazed” sheep in limited pastures, between cultivated fields. As a result of such conditions, they had to work closely with man, to chase the herds along the roads and paths according to his directions and keep an eye on them, that sheep or cattle do not go beyond the boundaries of the road or pasture and do not damage the crops in the field. Scottish Sheepdogs, on the other hand, worked more independently in the extensive mountain pastures. There is a problem of guarding grazing animals, so that they do not harm, it is practically non-existent. The role of the Shepherd Dog comes down to guarding, so that the herd does not diverge too much, and to find stray animals in ravines or mountain chasms and bring them to the herd or shepherd's hut.. Their work is therefore more independent and therefore they are more difficult to arrange; they have no blind discipline, which characterizes German Shepherds. However, they cannot be denied intelligence. The English consider these Shepherds to be as versatile as the German Shepherds. However, imported collies on the continent do not withstand competition as utility dogs - except for communication service. Perhaps, too little has been dealt with as working dogs, but a fact, that the German Shepherd has gained great popularity in England - despite great restrictions and import difficulties - allows us to draw a conclusion, that the dog as a companion and protector rather surpasses his Scottish cousin. However, it cannot be denied, that the Scottish Shepherd is an extremely representative and decorative dog. So if someone wants to be satisfied with a beautiful dog, and at the same time vigilant guardian and faithful companion, and does not attach much importance to the ease of training, this one can have complete satisfaction with a Scottish Sheepdog. It is especially suitable for a rider or cyclist companion.

General impression. The Scottish Sheepdog should look like a beautiful dog at first glance, of unshakable dignity, of harmony undisturbed in any detail. That the collie would be able to fully realize its natural tendency to work as a sheep dog, must be strong and active, no heaviness and no signs of clumsiness.

Head. Viewed both from the front and from the side, it looks dull, shapely gusset. The cerebral part is flat, on the sides, tapering gradually and gently from the ears to the tip of the nose, without bulging cheeks. The end of the slender, a well-rounded muzzle is blunt, but not prismatic. Viewed in profile, the line of the skull cover and the bridge of the nose form two parallel lines of equal length, separated by a slight, but with a noticeable leading edge. The midpoint between the inner corner of the eyes is also the midpoint of the length of the head. The nose must be black whatever the color of the dog. The eyes are a very important part of the judgment and give the dog a gentle expression. They should be of medium size, set slightly obliquely, almond shape, dark walnut color. The exceptions are specimens with a marbled color, whose eyes (one or both) they are often blue or with blue spots. The expression in the eyes is full of intelligence, especially when the dog is listening. The ears are small, set on top of the head, not too close together or too far on the sides of the head. Backward facing in a relaxed state, in a state of tension and directed forward, semi-standing, with slightly broken ends. Big teeth, the lower incisors closely follow the upper incisors; the slight gap is not a serious disadvantage. The mandible is strong, clearly carved, not very big.

Torso. Slightly longer than the height of the dog. Strong back, slightly raised above the loins, ribs well sprung.

Front limbs. Simple, muscular with moderately strong bone; elbows not turned out or out, nor inward.

Tail. It should be long, ending at least to the ankle joint, quietly abandoned, but at the end with a light "pipe” upward. It can be worn cheerfully in times of excitement, but not above the back.