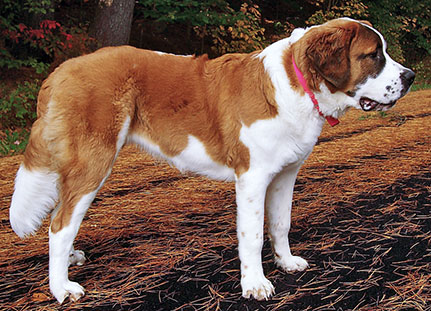 Switzerland is represented by popular, although we have a rare dog from the pass of St.. Bernard.

It was formerly the most popular race of the giants, enjoying general sympathy. Bernard is descended from a mountain shepherd dog, which was bred for a long time at the Augustinian monastery near the pass of St.. Bernard, connecting Switzerland with Italy. Initially, these dogs were the keepers of the monastery, later they became sanitary dogs, which - properly trained by religious brothers - ran through the mountain passes and paths, to provide food and medicine to stray travelers in baskets attached to the collar. The stray travelers were escorted to the monastery, and they brought brothers and sisters to the weak and the sick, who provided help. So they were utility dogs in every sense of the word, performing a sanitary role in the mountain rescue service.

The original type of Bernard differed significantly from the present type. They were lighter dogs, livelier and slimmer. On the basis of descriptions and pictures of that time, one can judge, that in appearance they were similar to Swiss Shepherd Dogs - spotted, straight-haired and short-haired. This type was also alive in the years 1800 – 1814 the famous "Barry”, thanks to which a life was saved 40 to people lost in the Alps. Nowadays, as a stuffed exhibit, located in a museum in Bern.

Monastery at the pass of St.. Bernard has existed since 980 r., but the first records of monastic dogs - then still watchmen - come from the second half of the 17th century. Only in the second half of the 18th century. there are records of rescue dogs, looking for wanderers lost among the mountains. They have played this extremely honorable role for many years, until the railway tunnel has been broken through the Alps and since travelers practically do not travel through the passes on foot. But even today a dozen or so dogs still live at the monastery.

It deserves a mention, that the original St. Bernard was a hard-haired dog, lighter and smaller. At the beginning of the 19th century. when various diseases, and perhaps some degeneration of the breed caused a decrease in its population - St. Bernards were crossed with Newfoundlanders. Since then, longhair has appeared next to short-haired ones as well; their growth has also increased considerably. Hardhair dogs are kept in the pack of monastic dogs to this day, because their coat is better adapted to snow conditions. These dogs have grown immensely in popularity. Numerous tourists, especially the English, they bought puppies from the monastery shelter, and then they started breeding them. The Augustians usually gave amateurs long-haired puppies. Besides, they were undoubtedly crossed with the Mastiff, thanks to which they became more massive, more short-headed, but much heavier. In year 1887 held the international congress of Bernard lovers in Zurich, on which a uniform pattern has been established.

General impression. Build strong, proportionately high, compact in all details, muscular. A dog with a powerful head and a very intelligent expression. The black mask gives the dog a more serious "face" expression”, but never ominous.

Head. Very strong and impressive. The cerebral part is wide, slightly arched, turns from side to side with a gentle rounding into strongly developed, high cheekbones. The back of the head is moderately developed. The supra-ocular arch is strongly convex, forming an almost right angle with the centerline of the head. A strongly indented frontal furrow begins between the eyes at the base of the mouth, extending to the base of the occiput, strongly marked on the forehead, and in the further part it gradually blurs. The side lines - from the outer corner of the eye to the back of the head - diverge significantly towards the body of the head. The skin on the forehead above the eyes creates weaker or more pronounced folds converging towards the forehead furrow; they pop out in excitement. Excessive wrinkling is undesirable (gives a gloomy expression). The cerebral part of the head goes abruptly and quite steeply into a short one, non-tapering muzzle; the length of the symmetry axis of the cross section of the muzzle at the base exceeds that of the muzzle. The bridge of the nose is not arched, but simple, in some dogs it is even slightly concave. From the base of the muzzle, along the bridge of the nose, a wide - quite distinct - groove extends to the nasal plate.. The upper lips are strongly developed,. not sharply cut, but in a graceful arc they pass to the lower edge, they hang slightly. Lower lips not too pendulous. Teeth must be strong and in proportion to the shape of the head. Black lips and nose desirable. The nose is very massive, wide, with open nostrils. Medium-sized ears, set quite high, with a strongly developed and slightly protruding base, form a strongly arched arch with the top of the head. A delicate auricle flap, undulating, rounded triangle shape, with a slightly extended end at the bottom. Its front edge is tight against the head, and the back - especially when excited - sticks out a bit. The turbinates with an underdeveloped epiphysis adhere to the head with the entire plane, giving it a less typical oval shape, therefore they are not desirable. Medium-sized eyes, dark brown, about mild, "Friendly” expressions, not set too deeply and more to the front than to the sides. The lower eyelids are usually loose and form an angular fold at the inner corner of the eye.