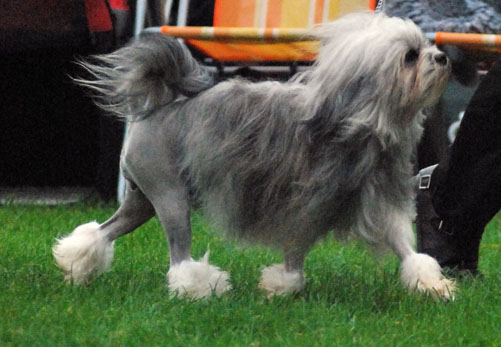 Pattern entered in the FCI register under the number 233

And this breed is credited with the old ones, at least medieval, origin. It is true that all theories based on the similarity of modern races with ancient sculptures or paintings are highly questionable.. Times are too far, and a dog's life is too short, so that one can be convinced of the uninterrupted course of generations of dogs through the centuries. Subject to this, letting your imagination run free to some extent, one can make a theory, that in the Franciscan church in Opole at the foot of the tomb of the Duchess of Opole, the figure of such a dog was recreated, who was the favorite of the Duchess, not a lion, which probably none of the then at the Opole court saw. After this digression, I return to the description of the appearance of these dogs, currently not seen with us, and not very many in their homeland. It is small (20—25 cm i 2—5 kg) female doggy with a fairly short lion's head with drooping ears. Long coat, wavy, but not curly. Any ointment, but white is desired, slate., black or light yellow. Haircut "for a lion."”. Tail carried fancifully over the back, but not twisted. The whole thing is a grotesque figure of a "salon lion"”. More than once this breed is referred to as teneriffe - if it is not shaved left.