Sexual dimorphism is less pronounced in birds of prey than in other groups of birds. In some species, the male is slightly more colorful than the female, but most often they are very similar to each other. There is, however, a difference in size: the female is usually much larger, sometimes by a third. The small European birds of prey are no bigger than the turtle-dove, the wingspan of the mean is from 120 do 150 cm, and their body weight is from 800 do 1000 g.

Bielik, belonging to the group of eagles, it is the largest European bird of prey. It nests on the northern shores of Europe, from Germany to the east, throughout the Palearctic region. It is a flat bird, nesting near water and only rarely ventures during its winter migrations to places of greater elevation. The bald eagle is associated with the aquatic environment, in which he obtains his food. It flies by gliding or gliding flush with the water and hitting large fish, even weighing 6-8 kg. Fish is its main food, but it also attacks birds and mammals as large as its own, like herons, ducks, foxes or piglets. He also does not despise carrion. Bald eagle consumes on average daily 700 g of food. The body weight of an adult bird is 4-6 kg, hence he eats a fairly large amount of food. Because he doesn't despise carrion, in winter, it eats waste or remains of marine fish. This makes it easier for him to survive, because it occurs less and less. 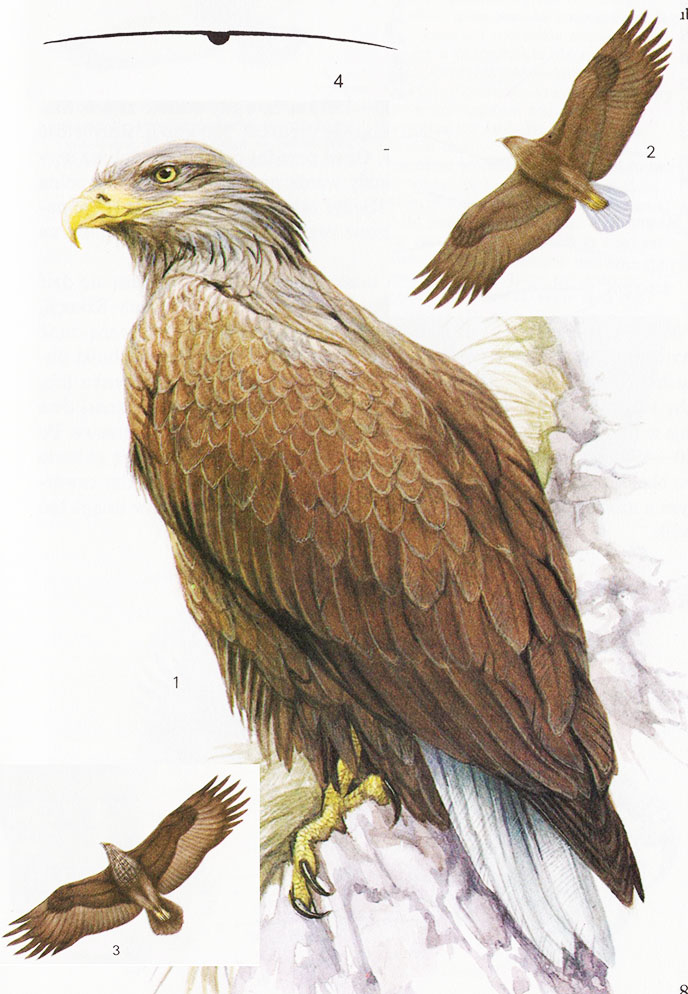 Adult bielik it is brown, its pristine white tail is triangularly finished (1). This feature, clearly visible in flight (2), allows you to recognize the species and age of the bird. The tail and the rest of the body of young white-tailed eagles are brown-black (3). The tail becomes brighter over the years, until completely white in the fourth or fifth year of life, that is, at the age of, in which the white-tailed eagle becomes capable of reproducing.