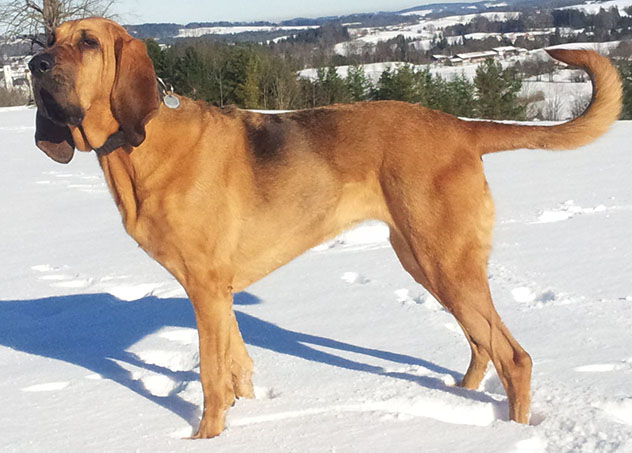 Bloodhound is the most typical representative of the group described here. It is an old breed, probably derived from the medieval "dogs of St.. Hubert ". Paired with dogs of a similar type, that the Britons and Angles bred, a type of modern bloodhound has developed. In English literature, dogs of this breed were popularized by Walter Scott. In addition, they have been used in England and the colonies for centuries to track down escaped slaves and criminals. Some English families have boasted of having a kennel of this breed for over two centuries. However, Belgium was considered their homeland.

Bloodhounds are characterized by a calm temperament, intelligence, and above all, the incomparable Węch, making them fit for investigative service like no other breed, however, to a lesser extent, to the defense service. In England, they are recently trained as the so-called. "Avalanche dogs". This breed is actually quite rare nowadays. Breeding is quite difficult, because they are quite susceptible to disease (probably as a result of relatives' rearing, immunity decreased), especially for distemper. Puppies require very intensive and rational nutrition as well as pedantic cleanliness.

It is also worth mentioning, that the Australian Police are successfully using hybrids obtained from crossing a Bloodhound with a German Shepherd. They are not beautiful, but they are supposed to be perfect at work.

Head. The most distinctive element in this breed: well formed, long, tall and narrow. Expresses majestic "dignity". The cerebral part is very high with a very distinctive occipital crest. The eye gaps are not very prominent. The skin on the forehead and cheeks is deeply wrinkled, more than any other race. Dark hazel eyes, quite deeply set, they seem relatively small. Pendulous lower eyelids, showing the dark red mucosa. The nose is always black. Very long and pendulous lips - their lower edges are approx 6 cm below the corner of the lips. The muzzle is very long and broad under the nostrils, concave and thin on the cheeks, and most of all under the eyes. Ears so long, so that when stretched forward they reach beyond the nose. Low set, they hang in graceful folds to the muzzle. Very delicate skin, covered with very short hair, soft and silky.

Neck. Long, allows the tracking dog to keep its nose to the ground without slowing down, well muscled, with strongly developed skin folds.

Torso. Shoulder blades are oblique and very muscular. Chest broad and deep. Broad and deep back, very strong for the size of the dog; loins strong, quite thick. Belly slightly tucked up.

Tail. Worn in an elegant bow, at a height slightly above the back line, but not over the back or curled. The underside is decorated with a brush made of approx 5 cm, curving gradually towards the tip of the tail.

Robe. Short and quite hard on the body, soft and silky on the ears and head.

Ointment. Black and tan or solid tan, the first one is more appreciated. The black coat on the back forms a saddle pad and extends to the sides, the top of the neck and the base of the head. A slight amount of white on the chest or feet is not a disqualifying fault.