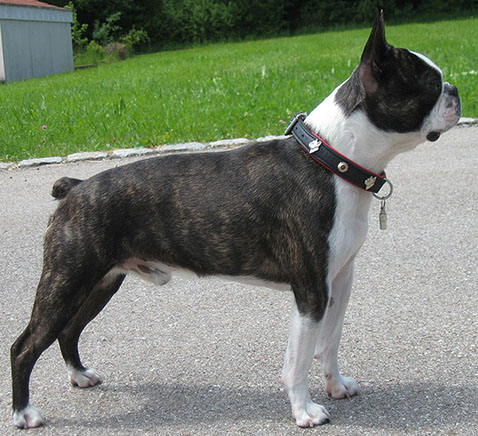 He is a native American dog and in his homeland is called the "American gentleman."”. Comes, as the name suggests, from Boston City, where, at the end of the last century, a team of fans set about breeding a new breed according to the same recipe, which in England resulted in a bull terrier. An English bulldog was crossed with a white English terrier. However, while in England the terrier type was selected, the Boston breeders put the main emphasis on a short head and rather bulldog type. Initially, this breed was called ,,round headed” (round-headed), and only in 1893 r. the name has been established ,,boston terrier”, under which it was entered in the books of the American Kennel Club, and then, reported by the English, entered in the FCI register.

The Boston Terrier is a harmoniously built dog, rather small, similar to a French bulldog, but without its caricatured features. And he is not a working dog in the strict sense of the word, but an ideal lapdog. Americans praise him as an extremely intelligent guardian and household companion. He is known from American films as a typical companion of playing children.

Not bred with us so far, but it appears at neighbors' exhibitions, and by the public it is sometimes confused with the French bulldog.

Head. The cerebral part is flat, angular, no folds, flat cheeks, forehead straight, leading edge well marked. Eyes wide apart, round, dark color, with an alert expression, friendly and intelligent. The eyes are well set, when viewed from the front, the inner corners are in line with the cheeks. Eyelids with square shape. The muzzle is short, angular, wide, deep, proportional to the cerebral part of the skull, no folds, shorter in width and depth (should not be longer than 1/3 the length of the cerebral part). The bridge of the nose is parallel to the skull cover; nose not very broad with a clearly defined line between the nostrils. Cheeks wide, angular. Teeth short, regular, a slight undershot bite shows a square chin, not withdrawn. Lips deeply set, but not saggy, completely cover the teeth. The ears (usually trimmed) carried straight up, small, delicate, seated as close as possible to the skull.

Tail. Low seated, short, not very thick, straight or in the shape of a corkscrew, no brush or coarse hair. Carried horizontally.

Disadvantages. Skull convex or receding forehead, no leading edge, eyes small, sunken or raised, Sure, showing too much protein; sharpened muzzle, teeth visible, tail too short and thick or dewlap too long (wow), lightweight construction, flat ribs, humped ridge (convex). The color is completely white or no white, too much white on the body, brindle or white irregularly distributed on the head. Hair too long - rough.