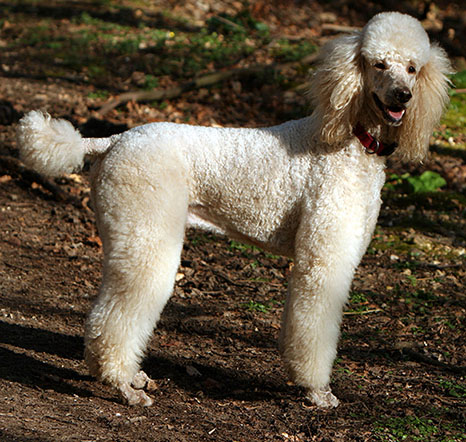 Who does not know such a popular dog, which was already fashionable in the times of our grandparents, and even great-grandparents. However, few people know about it, that he was once a hunting dog, also known as the Hungarian Water Dog. His appearance and disposition indicate this, that he is a descendant of both hunting and sheep dogs. Both types, for centuries they have developed their intelligence by cooperating with humans, and thus ease of learning. So no wonder, that it has been famous for generations as the epitome of canine wisdom. Are you in the circus, or at home - excels in learning everywhere.

General impression. The dog used to belong to the utility group. Proportional build, a characteristic curled or rope garment, cropped on the back of the torso and limbs. It gives the impression of an intelligent animal, perceptive, alive, harmoniously built and embodying elegance and "haughtiness."”. His gait is danceable and light; unwanted fluid and drawn out. Attachment, ability to learn and train, makes him a particularly nice companion dog.

Head. Refined, with straight contours, in proportion to the body, length slightly greater than 2/5 the height of the dog at the withers.. The cerebral part is well modeled, its length is less than half the length of the whole head (the orientation of the axes forming the angle of the facial axis approximately 16-19 °). Supraocular arches moderately convex, covered with long hair. Frontal furrow wide between the eyes, tapering towards strongly marked (in miniatures less prominently) the back of the head. The nose is prominent and well developed, viewed from the side - vertically truncated. Black in black and white specimens, brown in chestnut. Nostrils open. Solid profile, elegant, not sharpened. The bridge of the nose is straight, length approx 9/10 the length of the head in the cerebral part. The jaws are almost parallel. Lips moderately developed; rather dry, medium thickness, bottom tightly fitted, the upper one rests on the lower one, not sagging. Black in black and white and gray specimens, brown in chestnut. Strong teeth. Jaws normally come together. Cheeks not prominent, modeled on bones. The leading edge is very slightly marked. Eyes with a fiery expression, set at the level of the leading edge and slightly sloping. Black or brown, very dark in black and white poodles, dark amber in chestnut specimens. The ears are quite long, falling down the cheeks, seated on the extension of the line from the top of the nose to the outer corner of the eye, flat, widening below the root and rounded at the tip. Covered with very long curly hair.

Torso. In good proportion; length slightly greater than the height at the withers. The bridge is slightly protruding and situated quite high, which causes the head to be carried high and freely. The chest reaches the bottom to the elbows; width equal to approx 2/3 her height (from the spine to the sternum). Oval arched ribs, wide from the back; Harmonious back, short. Loins muscular and strong. Belly and flanks tucked up, but not the greyhounds. The croup is rounded, however not beheaded.

Front limbs. Withers moderately developed, oblique shoulder blades, muscular, forming an angle of 90 ° to 100 ° with the legs. The length of the arms corresponds to the length of the shoulder blade. Front legs perfectly straight and parallel, elegant, well muscled, with strong bones. Elbow distance from the ground - 5/9 height at the withers. The wrist forms an extension of the front line of the arm. Pasterns strong, but not massive and almost straight in profile. Paws rather small, black, the shape of a short oval. Toes well arched, stringy, closed with a fluid membrane, resting in balance on hard and thick pads. Nails black in the black variety, black or brown in chestnut; in white, dark or light nails are acceptable, color harmonized with the overall pigmentation.

Tail. Set quite high - on the line of the loin, cropped o 1/3 or 1/2 in curly poodles; long, if worn well, it is not defective. In cord poodles it may be kept at its natural length. Carried obliquely when in motion.

Robe. Elastic leather, not loose, tinted; silver is desirable in white poodles (there are examples with fair skin, spotted), in black, brown and gray, pigmentation adapted to the ointment

Poodle curl on cotton wool: hair abundant, with a delicate structure, woolly, curly, elastic, very dense and well kept, forming even curls. Corded poodle - abundant hair with a delicate structure, woolly and dense, forming characteristic cords of equal length, at least 20 cm (the longer they are, the more appreciated). The cords on both sides of the head can be tied with a ribbon above the ears, as well as both sides of the torso, to avoid unwanted hair.