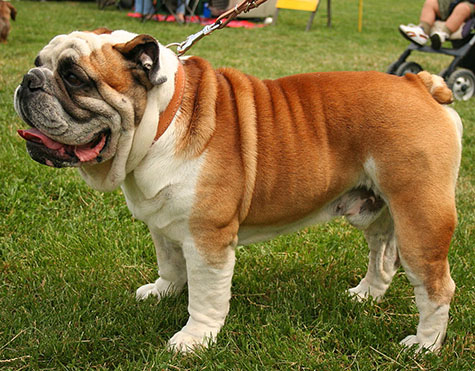 Dogs of this breed, bred in England, come from the same trunk as the mastiff and - as the name suggests - were used in bullfighting. Their role was to bite into the opponent's nostrils, which they immobilized in this way. In these fights, they were favorable traits for the dog: not very high height and fierceness and strength. These are also the features of the bulldog. The retraction of the nose was considered - probably rightly so - to be a positive property, because it made it easier for the dog to breathe while biting the victim with its full mouth.

Breeding dogs of this breed is difficult, therefore in England there was created - one could say - special knowledge about the bulldog. Obtaining all qualities in one individual, which it should correspond to according to the pattern, it was very difficult. For example, very abundant skin on the head and mask does not usually go hand in hand with small and light ears. Likewise, the two opposing features are the thickness of the short tail at the base and its thin tip. However, such features are required of a bulldog. Finally, a large, heavy head combined with a narrow pelvis are typically degenerative features, impeding the maintenance of the breed, because they are the cause of heavy births. Therefore, in breeding dogs of this breed (exception!) mating a physically immature bitch (before it completes its growth) it is not only acceptable, but even recommended. The point is, that the bitch's first birth takes place at this stage of her development, when the pelvic ties are still flexible and more easily stretchable. In this way, the mother's body prepares for the next birth.

Bulldogs, contrary to appearances, have an extremely mild disposition; they are not offensive or malicious. In England, they are considered the best canine caretakers for young children, from which they even endure annoying nuisance. Phlegmatic by nature, they are not easily disturbed by equanimity, but if they get into a fight, they will not give up without defeating the enemy. Irritated by strangers - they become dangerous. They show touching loyalty to the owner and household members, they reciprocate kindness and friendship.

Apart from the difficulties of breeding, they are perhaps the most ideal dogs for domestic companions in urban conditions; they need little runway, they are not noisy and do not require any special measures to keep them clean.

Before the war, there were a few breeders of this breed with us. In the first post-war period, bulldogs completely disappeared throughout Central and Eastern Europe, but recently in the Czech Republic, in Hungary, and also the first specimens appeared in our country.

General impression. When evaluating a dog, special importance should be attached to the first impression, which the judge takes when judging, at first glance, whole. In second place, you should pay attention to size, shape and figure, and especially their relationship to each other. No detail should stand out above the others to this extent, to disturb the overall symmetry, or to give the impression of deformation. In third place - elegance, the way you carry yourself, traffic, composed manner. Individual points should be considered separately, being taken into account, that bitches are not as big or as strongly developed as dogs.

The bulldog is smooth-haired, stocky dog, rather low, but wide for its size. The torso is short and tied tightly, thick and muscular limbs. The croup is erect and strong, but rather lighter compared to the heavier front. The dog should have an impression of decisive strength and activity similar to this, what a stocky look imposes, heavy horse.

Head. The cerebral part is very wide - the wider the better. The circumference of her (measured in front of the ears) it should be at least equal to the height of the dog at the withers. Viewed from the front — tall from the end of the mandible to the top of the skull cap, and also very wide and square, head viewed in profile - very tall and very short from the back to the tip of the nose. Very convex cheeks, they slide sideways beyond the eyes. The forehead is flat, neither convex nor protruding over the muzzle. The skin on it and around the head is very loose and profusely wrinkled. The bones of the forehead are prominent, wide, which creates a deep and wide cavity between the eyes, extending to the leading edge. A wide and deep furrow extends from the leading edge to the center of the skull cap, palpable up to the crown. The muzzle from the base of the cheekbones to the nose should be as short as possible, and the skin on it is deep and profusely wrinkled.