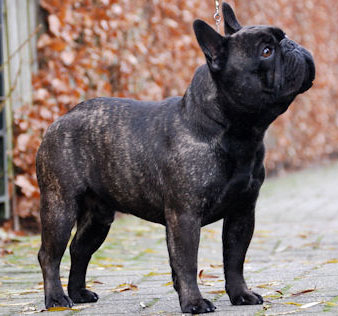 The blood of the old British is flowing in the veins of the French bulldog, but probably with the blood of a pinscher or terrier.

The English Bulldog is phlegmatic, and in the event of irritation - relentless stubbornness, while the French bulldog is a rather lively dog, reasonably vigilant, cheerful and bright. As far as the English bulldog could be called "a caricature personification of horror”, so much his French cousin's "cheerful grotesque" he resembles an English bulldog, but it is more mobile.

General impression. The dog is powerful in its small form, proportionally concise, with smooth hair, short mouth and flat nose, erect ears and a naturally short tail. It should seem active (vital) and intelligent, very muscular, compact and solid-boned. It is suitable as a companion at home and as a guardian.

Head. Strong, wide (the advantage of width over length) and angular, covered with an almost symmetrically folded and wrinkled skin. Characteristic retraction of the maxillofacial part Occipital crest in atrophy. Facial retraction explains the details given when describing the individual facial parts. The cerebral part is wide, almost flat. The forehead is strongly arched, as are the supra-ocular arches, separated by a furrow, especially clearly marked between the eyes. The furrow does not continue across the forehead as on an English bulldog. Parietal crest not well developed. Broad nose, very short, zadarty; nostrils wide, open and regular, slanting upwards. With this positioning, however, the nostrils should not be pinched, as it prevents you from breathing freely through your nose. Thick lips, a bit loose and black; the top one must meet the bottom one in its center, that it covers the teeth completely (insufficient covering is unacceptable). Viewed in profile, the upper lip is drooping and rounded. The jaws are wide, angular, strong construction. Mandibular angle desirable, sufficiently obtuse, allowing it to be extended in a wide arc (center bending of the arms) and protruding in front of the jaw (prognatyzm). A mandible that is too short or too long is therefore defective. The positioning of the incisors in the rounded dental arch prevents lateral deflection resulting in sticking out the tongue. The convergence of the incisor arcs is not strictly required; an essential condition is that the lips come together, so that they completely cover the teeth. Cheek muscles - well developed, but not exaggerated. The leading edge is strongly accentuated. Eyes with a lively expression, low set, quite far from the nose, and above all from the ears; dark, quite big, clearly round, slightly convex, with completely invisible protein, when the animal looks straight ahead. Black eyelids. Medium-sized ears, wide at the base, rounded at the top. Set high, but not too close together. Worn straight. The auditory opening is fully visible when viewed from the front. Delicate skin, soft to the touch.

Torso. Chest broad, cylindrical and deep. Arched ribs, very rounded, they restrict the chest in a barrel-like manner, providing enough space for the organs in it. The back is broad and muscular. Loins desirable short and stocky, so that the profile of the back and loins rises gradually towards the kidney area, and from there it falls sharply to the tail. Belly tucked up, but not greyhounds. Croup truncated.

Front limbs. Shoulders short, thick with tight muscles, clearly emphasized. Short arms, the elbows close to the body, which in the dog's gait prevents them from being weaned. Thanks to these features, the vertical position of the legs can be maintained. Short arm, clearly marked, simple and muscular. Wrist well developed and short, viewed from the side and from the front, vertical. Round paws, small (the so-called. kitten), well positioned on the ground, fingers slightly pointing outwards. Palce black, high arched; nails short, thick and well-defined. Hard soles, thick and black. Nails required in brindle specimens black, dark ones are desirable in spotted ones, but there are lighter defects (in all shades of corner color).