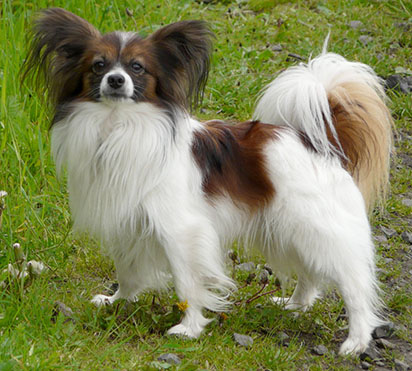 Her race, although now included in the Franco-Belgian family, by some authors - probably rightly so - it is classified as a Mediterranean or even Spanish dog. It is undoubtedly a very old breed, and many dogs of this type can be found in the paintings of the ancien regime from Louis XIV to the Great Revolution. He and his ladies died from the audience in France, but it is preserved in Belgium and hence now the double parantel. The name can also stimulate discussion, because today it is difficult to find any features of the epagneula hunting dog in this decorative dog. Currently, the official name in the FCI register is like that, though many former authors, a and many contemporaries, he still calls him "papillon."” (butterfly) because of the characteristic ears protruding like butterfly wings, and the eeyore variety - phalene.

General impression. Dwarf spaniel, luxury, with a normal and harmonious structure, long-haired, with a muzzle of moderate length and shorter than the part of the brain. Alive, grateful, but robust. Proud attitude, free and elegant movements. The length of the body is slightly greater than the height at the withers.

Head. Normal proportion to the body, but relatively lighter and shorter than spaniels large and small. Cerebral part not very round or in profile, nor at the front: sometimes there is a trace of a frontal furrow. Kufa (mouth) shorter than the cerebral part, soft, sharpened, not very wide. He doesn't dare to be upturned. The leading edge is quite marked. In heavier dogs - less strong, but always noticeable. It is more pronounced in very small dogs, but it never creates a sudden breakdown. A small truffle, black and rounded, but slightly flattened on top. Strongly pigmented lips, thin and close fitting. The dentition is quite strong, overlapping short circuit. The tongue does not dare to be visible. The eyes are quite large, open, almond-shaped, not prominent, quite low set, the inner corner lies at the junction of the cerebral part and the muzzle. Dark and very expressive color, very pigmented eyelids. Ears set quite far back on the head, quite far apart, the cover of the skull appears slightly rounded. The ear cartilage is delicate, but flexible Both in the erect-eared variety and in the drooping-eared variety, the cartilage framed in the fingers should not be sharp.. In variety, with pendulous ears, called phalene, the resting ear is set high, clearly above the eye line, hanging, but still quite mobile, decorated with wavy hair reaching a great length, which gives the dog a special charm. A variety with erect ears (papillon) his ear is set high, open shell, directed to the sides. The inner edge of the shell forms an angle close to 45 ° with the horizontal. Under no circumstances should it point upwards, which would be like a pointer's ear. The inner part of the shell is also decorated with wavy hair, The long hair extends slightly beyond the edge of the ear, the outer surface, on the other hand, is covered with a long one, hair, forming feathers extending abundantly beyond the contour of the ear.

Crosswords of these varieties have semi-erect ears, broken at the end. This indirect form of wearing the ear is considered a major disadvantage.

Torso. Neck of medium length, slightly bent at the nape of the neck. Chest broad, quite deep, its circumference at the last two ribs should be equal to the height at the withers. Sprung ribs. Backline not too short, but not flat either. Loins strong and slightly arched. Belly slightly tucked up.