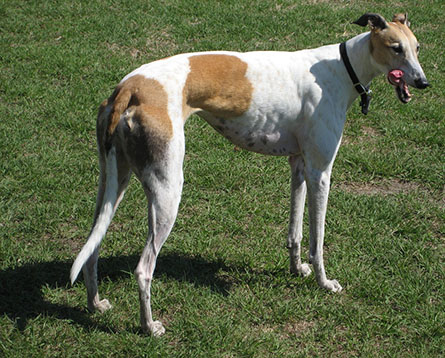 Undoubtedly, African greyhounds are the origin of short-haired English greyhounds. Hunting with greyhounds can be found in very early records of the island's literature. The descriptions of the dogs, however, were not very precise, mention two types of hair - short and coarse. Both types, quite different, have survived to this day.

In the 15th century, the Sopewell Order book gives a verse description of the English Greyhound, which should have: The snake's head, the neck of the drake, bream sides, cat paws, rat tail”.

This is obviously not a pattern, but he might be apt to list the characteristics of the breed. In the eighteenth and nineteenth centuries, numerous games of greyhounds for the winner's cup were recorded. And just like Epsom, it has become a symbol of horse racing, yes Altcar - chasing greyhounds after the hare. Just like Thoroughbred lovers know famous winners, yes and greyhound breeders mention the dogs, which won their first prizes over a century ago, and they find their bloodlines by studying the pedigrees of modern greyhounds. The pursuit of a living hare has been distanced by races after a mechanical hare. In September 1876 r. the first such public distance race took place 400 yards. One of the winners was sold in 1888 r. too fantastic, for those times, sum 850 pounds, which, even with the current devaluation of money, is by no means a triviality.

Over the course of a century, the sport has also become a major "industry."” not only in England, but also in the USA. Racetracks popped up everywhere like mushrooms. A national sighthound racing club was established, who laid down the regulations and oversees this sport. This club is a guarantee, that the competition is carried out according to the established rules and that the rules are strictly adhered to. The sport of greyhound racing has taken over masses of the English who are hard to imagine. H. Edwards Ciarka mentions in the Greyhound monograph, that a year 1970 more than 78 thousand. people were registered in the clubs of lovers of this breed. You have to remember this, that many of them had several dogs that they entered for races. As a rule, however, they did not raise greyhounds themselves, but for an appropriate fee, they entrusted them to trainers who maintain large guesthouses - kennels. How significant amounts are involved in greyhound racing, this is evidenced by the main win of the greyhound ,,Patricias Hope” w 1972 r.( which she brought to the owner 10 thousand. pounds.

The popularity of the breed was based on racing successes, but from 100 for years they also appear at exhibitions.

Greyhound rearing and training has become special knowledge, which has become a profession for thousands of people. Breeders of this breed should know, that bitches usually only heat once a year, and often they mature later than bitches of other breeds.

Ointment. Black, White, Red, blue, fawn, sarnia, brindle or any of them with white patches.

It's probably worth mentioning, that English breeders introduced bulldog blood into the original greyhounds to improve their coat and give them grip. But let's remember, that the old bulldogs looked more like the current bull terrier, than the current stationary bulldog.