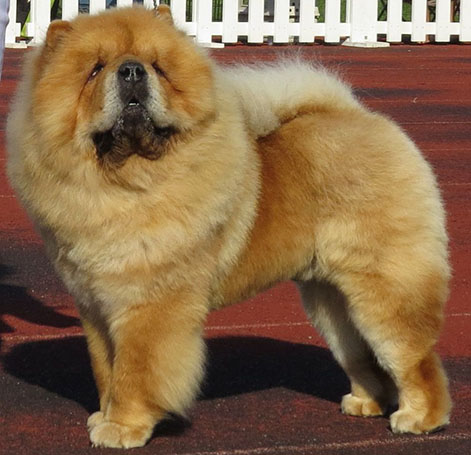 Chow-chow, that is, the Chinese Spitz, gained a separate position in sports cynology. This breed comes from China, where it was bred for utility purposes; the dogs acted as watchdogs and served as meat and fur animals. According to some authors, in the Mongolian steppes they were also used by hunters as searchlights, flushing and retrievers while hunting pheasants. Only English breeding, followed by others, they turned them into a peaceful race.

Chow-chow has a relatively calm temperament, he is quite a good defender and not a noisy guardian, but difficult to train. It will not replace a typical utility dog, but takes its proper place as decoration and home watchman. He has a moderate protective instinct and is not cowardly. The only thing he dislikes is over-training and unequal treatment. Apparently he is also suitable for a wild boar, when his passion awakens in him, because his sense of smell is very good.

General impression. Balanced, satisfied. It looks like a lion. It is the only breed distinguished by a stiff gait and black-blue tongue. General body structure concise. Short back. Torso well positioned on the skeleton.

Head. Flat and wide with a barely pronounced leading edge, well filled under the eyes. Moderately long muzzle, wide from the eyes to the tip of the nose. The nose is large and broad, black (except for cream and white varieties, in whom the light nose is acceptable and in the blue and fawn ones with the nose color adjusted to the color of the coat). However, in all color varieties the black nose is more desirable. Dark and small eyes, with almond shape. Light eyes allowed in blue and fawn varieties. Ears small and thick, slightly rounded at the ends, carried stiffly, set forward above the eyes and set wide apart (it gives a gloomy look, so typical of this breed, ang. scowl). Teeth strong and even; scissor bite. Blue-black tongue. Black lips and palate. Gums desirable black.

Torso. Chest broad and deep.. Short back, straight and well-muscled, just like the loins.

Hindquarters. Muscular. Hocks low to the ground, perfectly simple, which is very important due to the gait characteristic of this breed. Strong hocks desirable. Little paws, round (the so-called. kitten) firmly positioned.

Tail. Set high, carried over the back.

Ointment. Solid black, Red, blue, fawn, cream or white - sometimes with raids, but not flecked or multi-colored. The underside of the tail and the back of the thigh are often lighter in color.

Body dimensions. The minimum height at the withers 45 cm, but usually the correct ratio of height to weight determines the judge's judgment on this trait.

Disadvantages. Pendulous ears. Spotted or speckled tongue. Tail not carried on back. Spotted ointment. Nose not black in black or red varieties.

A short-haired chow-chow with identical features is also known, except for the structure of the garment, which should be short.