We divide ducks according to their characteristic behavior into diving and surface. Surface ducks are represented especially by the genus Anas. They seem to balance lightly on the surface of the water with their rump protruding above the water. They gather food on the surface or dive, keeping the back of the body perpendicular to the water. They only dive completely for fun or when they feel unsafe. They fly instantly, without taking a run. The mirrors on the wings are distinguished by vivid colors: green, blue or brown. The cyranka can also be recognized by its spur without any hard edges.

Cyranka nests all over Europe (except for the northern and southern regions) and most of Asia. It is one of the smallest surface ducks. Her body weight ranges from 300 do 500 g and roughly corresponds to the weight of a partridge or a crested partridge. After returning from wintering grounds in southern Europe and northern Africa, he stops near small ponds, provided that even a minimum amount of greenery is found there. It nests in the same places as the mallard. In May and June, sometimes in April, the female endures 8 do 10 yellow-green eggs, which incubates for approx 28 days. Like the other ducks, incubating begins after the laying of the last egg, therefore, the chicks hatch almost simultaneously. When they dry up, the duck leads them to the water. 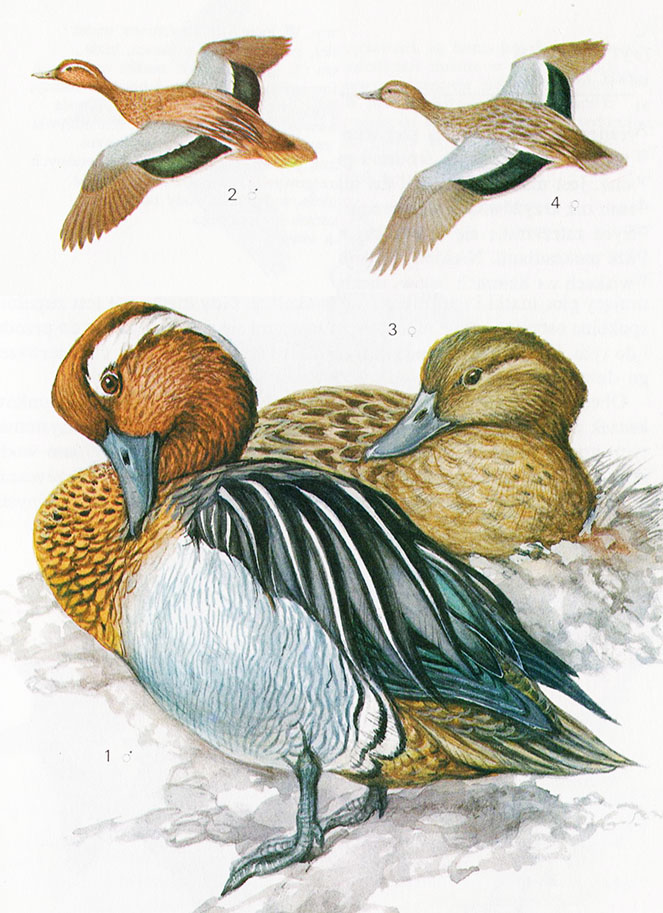 Male Teal in the mating dress it is distinguished by large ones, overlapping the nape of the neck, white eyebrows very well visible on the brown and chestnut head. The entire coat is gray-blue, and the whitish sides contrast with the dark brown breast. A vivid green mirror on the wings is framed from the top with a white stripe (1). In flight, the front blue-gray edge of the wings is very visible (2). The female is brown, spotted, distinguished by delicate white and brown eyebrows (3). In flight, it appears darker than the male, her green mirror is smaller and more dull (4). Cyranki they are excellent flyers who can easily reach speed 120 km/h. The male screams like winding up an old clock. The female's voice is weak and shy. Game bird.