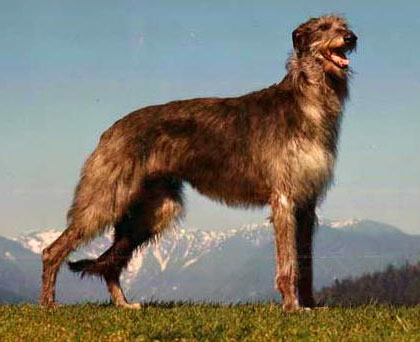 It is a very old breed. It comes from the times, when firearms were not used in hunting big game, but with a spear, and hunters chased game on horseback after greyhounds or hounds. „Deer” means' deer”, a „hound” — pies, So a deerhound is a beagle that chews a deer. A dog with a similar silhouette is found in reliefs depicting Diana hunting and in old paintings depicting hunting scenes. Today, of course, dogs of this breed have become examples of amateur breeding.

Head. Long, the widest between the ears, tapering gently towards the eyes, with the muzzle tapering visibly towards the nose. Rather flat than rounded in the cerebral region, with a slight rise above the eyes, completely without leading edge. Covered with moderately long hair, softer, than on the rest of the body. Dying zaostrzona, with horizontal lips, equipped with a mustache made of rather silky hair and a beautiful beard. Black nose (it can also be blue, in some bluish-fawn specimens) and a bit hunchbacked. Dark mask is desirable in light-colored dogs. Dark eyes, usually dark brown or hazel (undesirable clearly clear), moderately convex, with a gentle look, when the dog is relaxed, but sharp, directed into the distance, when the dog is animated. The edges of the eyelids are black. Teeth equal. Ears set high and relaxed, folded back like an English Greyhound, in excitement and raised above the head, however, the collapse remains; sometimes they are even semi-standing (standing are faulty) soft, smooth, velvety to the touch. The smaller, the better. Often there is silky hair on the ears, silvery. Regardless of the general color of the dog, the ears must be black or dark in color.

Neck. Long, dry and plump with a very strong neck. Too long is neither necessary nor desirable, because the dog does not have to bend its head when running like other greyhounds. Mane, that any good specimen should have, optically reduces the length of the neck.

Torso. Like a larger greyhound, but with a stronger bone. Chest deep rather than broad, but not too tight and flat. Loin well arched and sloping towards the tail. Straight back undesirable, because it makes it difficult “uphill run and very ugly.

Front limbs. Simple, wide and flat, about strong, broad forearm and elbow. Shoulders quite oblique, far back overlapping and not too wide apart.

Hindquarters. Croup sloping, as wide and as strong as possible, hips as far apart as possible. Hind legs well angulated at the knees, long in the lower leg; wide and flat ankle joint. Feet tightly closed and arched at the toes. Strong nails.

Tail. Long, well hairy, thick at the base, tapering and reaching almost to 4 cm from the ground. In a standing dog, sloping downwards straight or curved, arched excitedly, but never over the topline. The hair on the upper side is thick and stiff, on the lower one it is longer, finally, small fringes are not a defect. Curled tail unacceptable.

Robe. Hair on the body, neck and thighs thick and stiff, length 7,5 do 10 cm, on the head, breasts and belly much softer. Light fringes on the inside of the front and hind legs are allowed, but they should not be as plentiful as a collie's feathers. Deerhound is supposed to be a hairy dog, but not excessively hairy. Wool robe defective. Some families have a mixture of silky and coarse hair, which is better than a woolly garment, but the most appropriate hair should be coarse, adherent, rough and rough.

Ointment. Uniform in principle. Blue-gray is the most liked, then dark, and light gray or brindle (darker usually more desirable), yellow, sand red and red fawn, especially with black markings (ears and mouth). White undesirable, but a white breast and white fingers (often found in dark-colored dogs) they are not too big a disadvantage, but the less white, the better. A very defective white star on the forehead or a white "collar" on the neck. The white tip of the tail happens on the best lines.