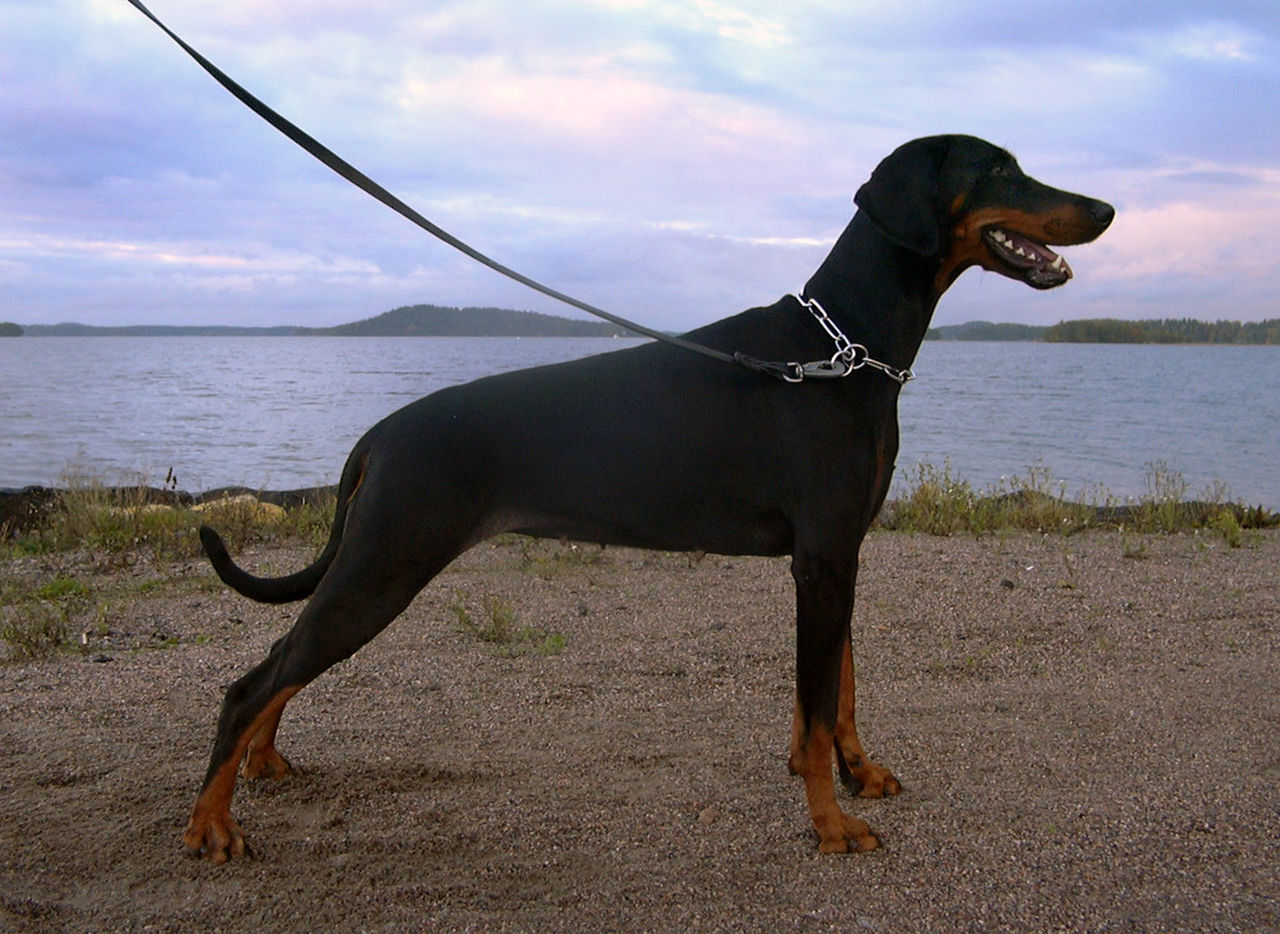 It is a large pinscher, which, apart from the features of a pinscher, undoubtedly has something of a sheepdog in it. It is included in the so-called. police dogs. Probably this race has outlived us. already at the peak of its popularity, and nowadays it is being replaced by calmer and easier to keep sheepdogs. Doberman, as a service dog, does not pass the exam in our climate because of too delicate hair, and as a lap dog, he has too much temperament. In the Middle East, however, Dobermans and their hybrids serve as police dogs. The breed name "Doberman” comes from Fryderyk Ludwik Doberman (from Thuringia), to whom is credited with the production of this race. The starting material was a local butcher dog (probably a cousin of the rotweiler), which the Doberman crossed with a sheepdog, similar to the modern German Shepherd and the then stable pinscher. Undoubtedly, the breeding efforts of Frederick Doberman had to be successful, if w 1889 r. his successors formed the first Doberman Pinscher breeders club, under which name is this race in 1900 r. was officially entered into German studbooks.

General impression. Medium size dog, strong and muscular. Elegant silhouette, turned out, upright posture, seems almost square, especially in dogs. The Doberman is easy to drive, but requires an experienced guide; ufny, brave, alert and brave. He is also characterized by intelligence, inborn sharpness and a perfect sense of smell. These advantages make the Doberman an excellent companion, defender and as a working dog.

Head. Clearly demarcated from the neck. Viewed in profile and from above, it gives the impression of a simple wedge. The skin fits tightly to the bones and flat muscles, making the head appear slightly modeled (dry). Viewed from the front and sides, the cerebral part of the head is flat. The lines of the bridge of the nose and forehead run parallel. Faceplate edge plate. The line of the upper profile of the head, from the nose to the parietal area and beyond, it falls slightly rounded to the nape of the neck. Teeth white, complete scissor bite. G<$r-on the edge of the skull viewed from the front - horizontal, so it should not fall towards uspm. Medium size eye, oval, as dark as possible. In Chocolate-colored and blue individuals, a lighter shade of eyes is allowed, but overall, both eyes and nose should be dark. Ears set high, worn straight, cropped.

Torso. Withers, especially in a dog, strongly marked. Chest proportional to the length of the torso (this depth is 50% the height of the dog at the withers), quite broad with the front part of the sternum sticking out towards the front (parapet). The ribs are slightly arched reaching below the elbow joint. Back short and sufficiently wide, strongly muscled. The backline is slightly sloping towards the rump. Loins well muscled. The croup is rounded, not sloping. Abdomen clearly tucked up from the end of the sternum to the pelvis. The body of a bitch may be slightly longer than that of a dog.

Front limbs. Strongly built. Seen from all sides - straight, perpendicularly. The arm with the long oblique blade makes an almost right angle. The well-muscled shoulder blade lies close to the chest, protruding above the processes of the thoracic vertebrae. Pasterns straight (not turned in either direction). Paws short and tight. Toes arched upwards (the so-called. cat's paws).

Hindquarters. Thighs wide, well muscled. The knee joint is firmly built; angle about 130 °. Hock joint strongly developed; parallel to each other, with the vertically positioned metatarsus they form an obtuse angle. Feet strongly arched, palce black. Dewclaws are not allowed.

Robe. The coat is short, compact, hard, tight to the skin and smooth.

Disadvantages. Too much arched nose (garbaty) or the forehead and parietal part of the head. Leading edge is too sharp or too weak, head too short and thick (cheek hyperplasia), spiczasta die. Ears too high or set too low. Teeth incomplete, Undershot or overshot mouth. Slanted eyes, convex or too deep set, Sure. Neck too short or too long. The presence of skin folds on the neck and dewlap. Bone too light, Short shoulder blade, loose or steep. Elbows twisted. The posture of the legs is small or separate- long paws, loose or soft. Back too long, sway-shaped or carp-shaped. Barrel chest with flat ribs, plate, too narrow. No forechest. Back badly angulated. Hocks turned outwards (barrel-shaped attitude) or inwards (cow). Cryptorchidism. Shaky gait, not free, tramping or crotch (the camel). Long hair, soft, rippling. Arson too bright, blurred, unclean, white marks. Cover hair too sparse and short, revealing undercoat. Nervous disposition, cowardly.