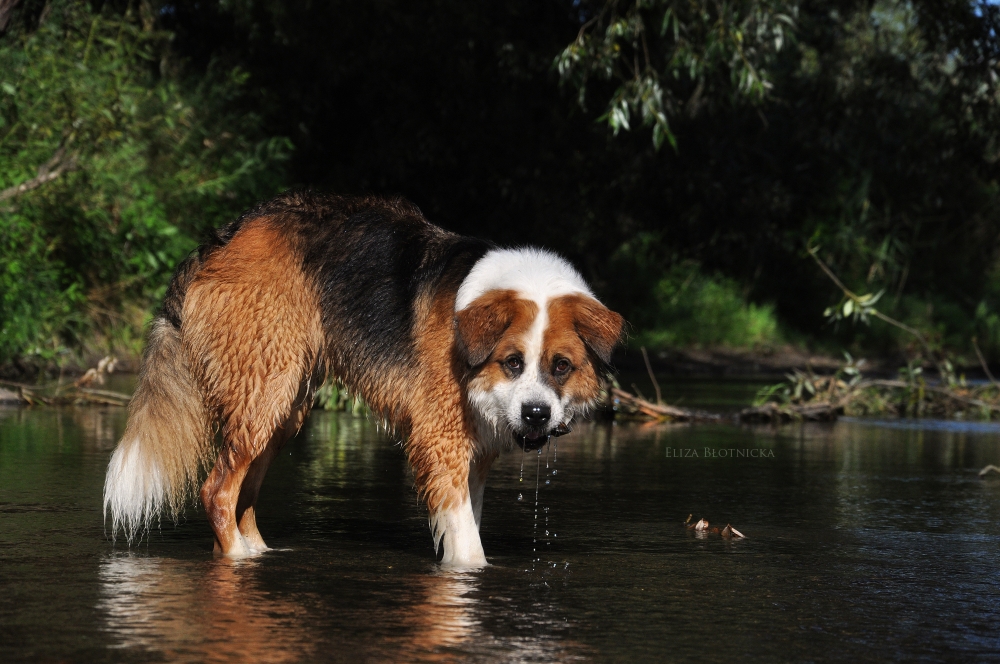 Most dogs willingly go into the water and can stay afloat, However, proper swimming is learned only after a long experience. The dog is unfamiliar with water, beating nervously with their paws, tries to keep his head and shoulders high, wastes a lot of energy, floods his field of vision and ears with splashes, thus swimming noisily.

A well-swimming dog calmly dives to the head, maintains the confidence of movements and does not get tired unnecessarily, can swim persistently. To tame the dog with the river or pond, it must not be brutally thrown into water; one can only be encouraged to get acquainted with this element that was initially alien to him.

With a dog that is young and not spoiled by bad upbringing, this will be an easy task. It's just that on a beautiful summer day you should be tempted by having fun while taking a bath, that he would start running in the shallow water and slowly decide to swim. When you cross a stream or a small river, the dog succumbing to its natural drive, who pulls him after the guide, after shorter or longer hesitation, he will also decide to cross. After a few exercises, he will start to swim himself willingly and will bring floating retrieves, if, of course, he had learned it before on land. It is harder, when dealing with a dog, that someone had already discouraged from taking the water, using bad educational means.

Once I got a perfect German Shorthaired Pointer, whom the previous owner had almost completely spoiled with brutal training. This dog had a phenomenal sense of smell; he performed like the best pointer when hunting partridges, he was great at retrieving gunshots. But he was scared and a little nervous, and he was so afraid of the water, that at the sight of her he failed almost completely on the easiest of tasks. Undoubtedly, he must have experienced some very unpleasant incident related to the water.

I slowly managed to embolden the dog, gain his full trust, so I had a lot of use for it in the field work. I was doing my best, to tame him with water, but in vain. The dog was penalized, until he saw the water. At the sight of her, distrust and fear returned. In the end, I was able to overcome it by chance.

We were hunting partridges. The dog was in great shape, I was in the best mood, happy with the work of the dog and hunting. After breaking up the flock of hens, my pointer placed one of them for me in front of a fairly wide drainage ditch, which he did not notice. After the shot, the partridge fell shot on the other side of the ditch, in front of our eyes, running away on foot. I called out ,,contribution ”. The dog stopped for a moment in front of the ditch, but the instinct to chase prey overcame fear. He tried to jump over the ditch, but the distance was too great, so he fell into the water. He had swam the rest of the ditch by necessity, and was already swimming back, retrieving gunshot.

True this time, apparently out of emotion, he crushed the hen mercilessly, which he didn't usually do. I did not scold him for this mistake, work, that for the first time so deeply embedded in the mind had been overcome. I carefully began to tame him with the water and eventually managed to largely make him a normal working dog. However, I did not manage to completely cure him of some unknown, unpleasant associations, triggering anxiety reflex.

The work of a hunting dog in water fisheries is analogous to the work of a flushing dog in the conditions of ordinary land fisheries., but only a lot of practice and skillful stimulation of instincts gives good results.

I would also like to emphasize, that while hunting with the help of a dog, we cannot send it to the water among ice floes, or then, when cold winds prevail, even when the dog itself showed a desire to retrieve, e.g.. shot down duck. Often times there is another way to deal with it, without the help of a dog. Better to give up the dubious shot, to avoid unnecessary suffering and wasting a gunshot, than to recklessly expose a precious and faithful helper to severe and incurable diseases.

Many pointers could carry out their service in good health for much longer, if the owners had not caused their premature exhaustion due to rheumatism and kidney disease resulting from colds. In addition, under normal weather conditions, a wet dog must not be idle by leaving it lying or sitting.. After completing the water work, the dog should be able to run freely, to dry himself. If we come back right after hunting, for example. a horse-drawn carriage or, what's worse, an open car, you need to wipe the dog well before taking it on the cart, if possible, dry and cover with a blanket.

A sufficiently large dog, especially the water walker (andofundlandczyka), you can also train as a drowning rescuer. Such training can only be entrusted to an adult and good swimmer, because an improperly trained dog can become a serious danger for a flowing person.