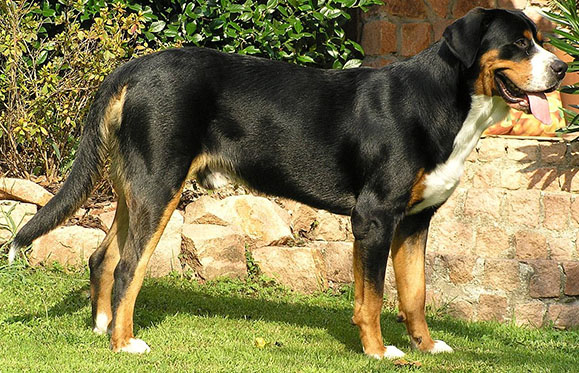 General impression. Big dog, powerful, busy, the main color is black with glowing rusty red and white markings. Harmonious in build and color, alert, attentive and faithful. Suitable as a watchman, companion, defender and as a workhorse.

Head. Strong in proportion to the body, but not crude. The distance from the occipital tumor to the eyes and from the eyes to the tip of the nose is approximately equal. Flat skull cover, wide. The frontal furrow is slightly marked. The leading edge is slightly marked. Normal cheeks - neither sunken, nor convex (puffed up). Broad nose, straight, often with a slight elevation in front of the always black truffle. Medium length muzzle, viewed both from above and from the side - not pointed, with adjacent black, dry lips. Teeth strong, scissor. Medium-sized eyes - not sunken, nor convex, from walnut to chestnut, about vigilant, intelligent and faithful expression. Eyelids tightly fitting. Medium-sized ears, triangular, set quite high. Quietly adjacent, forward in the animation, well hairy from the outside and inside.

Neck. Strong and muscular, the average length, without skin folds.

Torso. Withers high and long. Deep chest, wide, also well-arched to the front. The cross-section ribs form an oval, not flat, but not barrel-shaped either. Ridge moderately long, strong and simple. Croup long, wide, slopes gently towards the rear, graceful rounding. Belly and flanks, neither tucked up, nor too full. The length of the body from the front of the chest to the seatbone is slightly greater than the height at the withers, approximately in proportion 10:9.

Front limbs. Long shoulder blades, strong and oblique, form an obtuse angle with the arm, fit flat and strongly muscled. The forearm is strong and viewed straight from all sides, at the wrist joint only slightly sloping.

Hindquarters. Thighs wide, strong and very muscular, quite long, a viewed from the side, slanting to the lower leg, wide and strong ankle joint. Round paws, short, tight and arched. Dewclaws should be removed as soon as possible.

Tail. Pretty long, extends to the ankle joint, sagging in peace, slightly raised and bent upwards in motion, but never curled or raised above the level of the back.

Ointment. Basic black with shiny rusty red and white symmetrical markings. Red is distributed between the white and black colors. Red marks above the eyes (double eyes), on the shoulders, on both sides of the chest and limbs. The inner sides of the thigh are also red. .Black rim on the lower part of the tail and inner sides of the ears. White marks on the head (baldness and muzzle), on the chest and limbs and at the tip of the tail. White on the bridge of the nose and collar are acceptable.

Chody. Persistent, shifting and agile in stride and trot.

Disadvantages. The disadvantages of construction are any deviations in proportion and height, gender characteristics not pronounced enough, defects in gait, bone too light or too thick, lymph dog. Poor muscularity, fatness, head too heavy or too light. Tooth defects. Pendulous lips, loose eyelids, square or too elongated construction. Sway ridge, defective limb angulation, loose paws, hair too thin or too long. No temper, timidity. Conversely, too much sharpness and biting.

Defects of build and character should be judged more severely than beauty defects, because they diminish the utility of the dog.