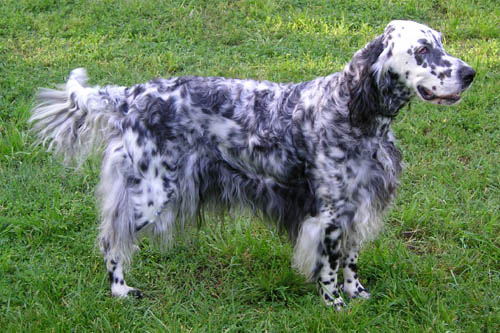 Setters as field dogs are as popular in England as pointers. This breed is undoubtedly very old. There is a dispute, whether they are descendants of spaniels, or their ancestors, or - most likely - they derive from the common trunk of dogs used for fowl. A spaniel is mentioned in English sources from the 11th century, who stands in front of the birds with his leg raised, and then crawls towards him, and when he has reached, he lies down in front of him. Hence their name: „couching spaniels” i „sitting dogs”, and the legatee must have taken its name from this property. Besides, these dogs are also suitable for long-beam and water hunting, they also retrieve more willingly than pointers.

The English Setter has been known in the English hunting literature for four centuries. Originally their coat was more curly. The modern English Setter comes from the kennel of Edward Laverack, which dogs are mentioned about a year 1825. The fathers of the family were the dogs "Ponto" and "Old Meli."”, whose offspring used for further breeding in kinship gave equal numbers. Hence the name of the English Setter as "laveracka”. From the Laverack kennel, a pair of dogs got into the hands of another talented breeder - Llewellin, which contributed to the further popularity of this breed with its breeding success. This line became popular under the name of its breeder, so that the second type was distinguished - llewellin.

These comments, relating to the history of the dog breed, which has been around 100 years triumphant at exhibitions and field trials, are important for potential buyers of breeding material imported from abroad. It deserves a mention, that nowadays this setter has become very popular in Italy and its population in this country is undoubtedly many times more numerous than in England, and the quality is higher.

The English Setter is a very friendly dog, with a calm disposition and outstanding hunting talent (hunting passion).

Head. Long and quite slender, with a clearly defined leading edge, oval, roomy, with a pronounced occipital tumor. Muzzle moderately deep and quite square. The distance from the frontal edge to the tip of the nose is equal to the distance between the poll and the eyes. Nostrils wide. Upper and lower jaws of almost equal length. Lips not too pendulous. Nose black or liver-colored, according to the color of the garment. Equal snout. Shining eyes, about mild, intelligent expression, dark walnut; the darker the better. Medium length ears, set low and hanging in a graceful fold tightly against the cheeks; velvet ends, and the upper part is covered with fine silky hair.

Neck. Rather long, muscular, slim, gently arched at the nape of the neck clearly protruding from the head, widening towards the shoulder blades, muscular, no sagging skin, with an elegant outline.

Hindquarters. Well-formed knees, with an expressive pond. Long thighs. Paws with very tight toes, strong and well protected by the hair between the toes.

Tail. It is placed almost on the back line, the average length, covered with hair or curls, nor hairy, slightly bent or saber, but not tearing upwards. The banner or feather hangs in long flowing wisps. Feather starts not at the base of the tail, but a little lower, extending towards the center, and then gradually shorten towards the end. Long hair, shiny, soft and silky, but not curly.

Robe. The hair at the back of the head is slightly wavy at the ear line, long and silky, as well as all hair. Pants on the back legs and feather on the front plentiful, reaching to the paws.

Ointment. Black and white, lemon white, brown and white or tricolor black and white and red. Specimens without large body patches, but finely mottled all over the body - more appreciated. Just like the Dalmatian, English Setters are born white, and the stains do not appear until later.