The front limbs of the dog – assessment. 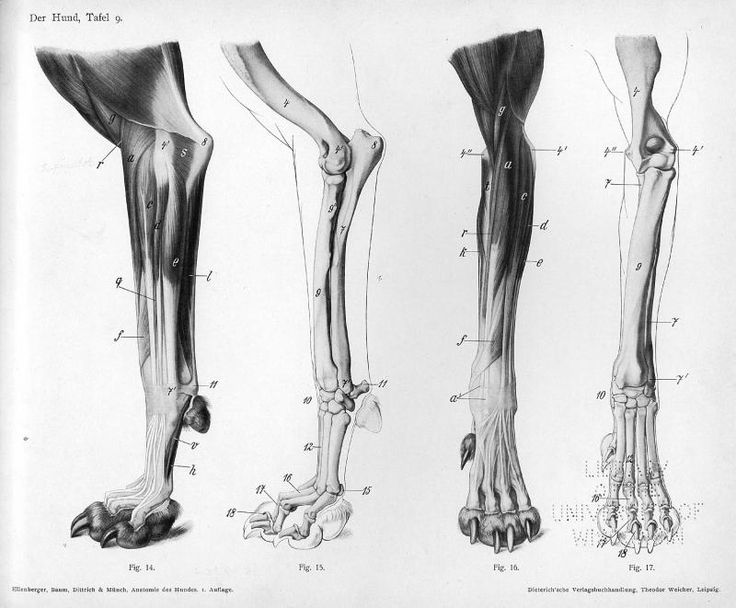 The bones of the front legs are made up of: blade, humerus (arm), forearm bones (radial and ulnar), wrist bones, four metacarpals and four fingers with claws.

Blade. Its seating is of decisive importance in working dogs. To, what we usually see in the silhouette of a dog and refer to it as a shoulder blade, it hides both a shoulder blade and an arm. The shoulder blade should be long and oblique to the chest. At the top of the shoulder blades is the highest point of the body - the withers; this is where the dog's height is measured. The extension of the line from the withers to the shoulder joint (the joint connecting the scapula with the humerus) it should form an angle of about 45 ° with the ground. This proportion is characteristic of the German Shepherd Dog, which can be considered the most harmoniously built dog.

The humerus. It should be positioned in relation to the shoulder blade at an angle of 90 °. With this proportion the dog has the longest stride at trot, because the breakthrough thrown forward hits the line of the arm extension. With this shoulder and shoulder position, the dog also has the right front, with the breast slightly sticking out in front of the shoulder line. If the paddle is steeper, the angle between the shoulder blade and the shoulder also increases accordingly, so that as a consequence the throwing angle and hence the stride length are reduced. Moreover, with a steep shoulder blade, the front part of the chest is retracted. Another fault with the construction of the service dog is the shoulder blade too advanced (typical for bulldogs and other breeds of stocky dogs with a massive front, lecz codach niezgrabnych, related, rolling). Apart from the angle of the shoulder blade, attention is also paid to its position in relation to the chest. It should be tight in all working dogs, well tied. A loose shoulder blade is defective and affects the dog's gait. With the shoulder blade set in this way, the dog's elbows are protruding, which is usually a serious defect in a working dog. However, in some breeds it is a typical feature, e.g.. in Peking.

Abdominal bones (radial and ulnar). They should be straightforward even then, when the chest is wide and thus the elbows stick out, like for example. in a bulldog. The optical illusion of curvature can only be created by well-developed muscles bulging on the sides of the upper arm. Both bones are taken into account when assessing the forelimb, muscling the arm and binding the elbow and wrist joints, as well as the angle of the shoulder with respect to the vertical. Depending on the race, the lower arm is vertical or slightly sloping back. Retracting the arm beyond the elbow joint is always considered a structural defect. The wrist joint consists of several bones. Depending on the race, it is either vertical to the ground, or forms a more or less obtuse angle with it. Too sharp an angle is defective, because it indicates loose joint ligaments.

paw (foot) consists of more or less arched fingers, which on the plantar side (or palmar) are equipped with cushion, hairless haughtiness (thickening) skins called pads. The shape of the paw may be round (the so-called. koci), oval or oblong (the so-called. hare); the latter is only allowed for a limited number of dog breeds. The toes may be more or less compact. They are looser in dogs raised in areas with sandy or marshy soil. The paw itself can be large or small, and the fingers are strong or delicate. Hair on the paws and spaces between the toes is a distinctive feature of some breeds (e.g.. Afghan Hound). On the condition of the claws and finger pads (pillows), sometimes also their color, particular attention is paid to working dogs.

Some breeds of dogs have characteristic hair on their hind legs: fringe, kosmyki, feathers or the so-called. trousers. Looking at the dog from the front, the posture of the forelimbs is assessed, which, as a rule, should be vertical, parallel to each other. The disadvantage is that the legs are taper downwards due to the bad seating of the shoulder blade. It is likewise undesirable to twist the limbs at the elbow or wrist joint. Only for a few races, like for example. u jamnika, a bend in the wrist joint is allowed, whereby the feet point slightly outwards.