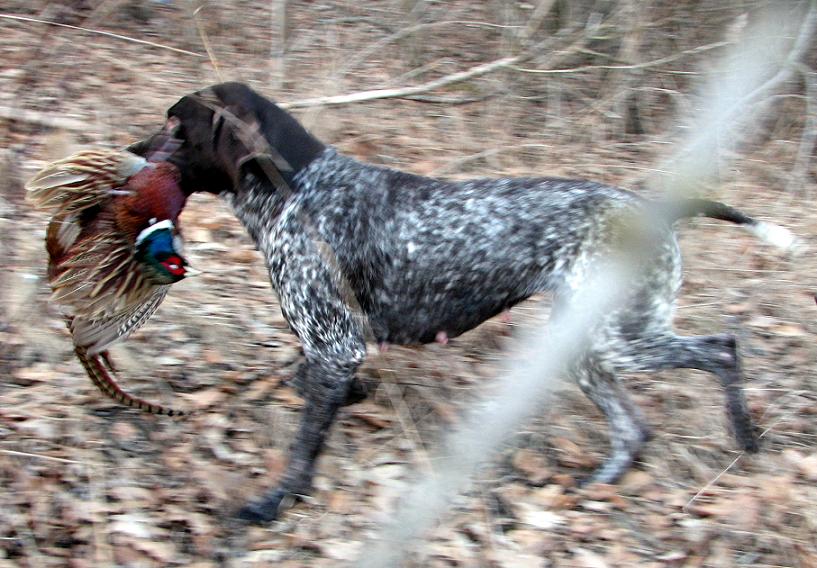 The main work of the pointer - 'displaying” or in other words "stand-up” it is actually contrary to the instinct that drives the dog to chase and capture game, Apart from roads, with which the breeding achieved this result, it must be said, that all of today's pointers, both English, and continental, have the innate ability to display game. A further goal of breeding should be the selection of individuals showing the most sensitive sense of smell and the best features of the pointers. The aim of upbringing and training should be to awaken instincts and direct them according to hunting needs.

We start learning in the field with the dog, who is showing at least satisfactory progress in falling down and has already received basic training in discipline. We will consolidate both of these exercises while studying, however, with moderation, so as not to suppress the pointer's predisposition to search the field. If the dog is to be versatile, what we expect from all continental pointers, Before commencing field exercises, he should also be trained in retrieving. If we release the pointer from this obligation, adding a retriever to help him, we have to modify science this way, that on the signal of reversion, different from the others (see the article "Searching”), we run forward in the hairpin bends ourselves, alternately - to the right and to the left, shortening its own path as the dog progresses, which we only mark with steps later, until finally the dog starts responding to just the nod.

The role of the guide in practicing the English pointer, especially the pointer, should be limited to practicing with the dog as often as possible and correcting any mistakes. However, a reservation should be made here, that English Pointers are nervous and can not stand harsh coercion. You have to remember at all, that if it is easy to extinguish a dog's innate temperament with brutal conduct, it is extremely difficult to awaken a nonexistent or extinguished temperament. The more sensitive the dog, the more the guide should be mastered, in order not to extinguish the dog's instincts needed in hunting by inappropriate behavior.

He starts learning, before the hunting season (for dogs from autumn litters - already in spring), in order to be able to use the dog in practice at the right time. Commencement of education before the opening of the hunting season also has its justification in this, that grown and shot partridges take off very early for flight, before the young dog even stands up. Learning while hunting alone does not give good results, because then the hunter, understandably, cannot focus his full attention on raising the dog.

You don't have to forget, that the pointer-laying conductor should be a good hunter, a composed shooter and able to control his own unwanted reflexes in any situation, so that his bad mental state does not infect the dog, who is an extremely sensitive recipient.

Good results can only be achieved in a fishery with enough stocking, so that the dog can actually find her often. Choose the days and times of the day at the beginning of your study, when partridges lie well.

Introductory exercises. For the initial exercises, we search for an area devoid of high thickets, that we may be able to observe the dog at all times. Large trench fields, which give partridges the opportunity to leak far away, are not suitable for this (escape) furrow. The best are medium-sized fields or a number of small peasant plots, where the furrows run perpendicular to the wind prevailing at the time of exercise. By practicing in a known fishery, the guide will know, in what part of the area it will find favorable conditions on a given day. In foreign areas, local hunting staff or other people familiar with the area can be consulted.

We approach the chosen fishery against the wind and starting from the middle of the side border of the field, we send the pointers with the slogan "forward!” - "search!” right or left, so, that the dog has more or less crosswind and possibly runs more or less parallel to the furrows. When the field is not too wide, we let the dog run them to the end, with the signal "district!”We turn it in the opposite direction, so that he traverses the field in a zigzag line. If the beds are wider, we divide the area like this, so that the dog, running 60-100 paces from us, could search the field in two or more turns. Avoid excessively braking the dog and allow it rather more freedom of movement and a stylish gallop, than lead to tangling under our feet.