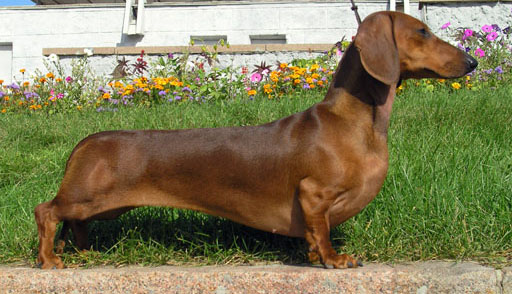 Dachshunds have gained immense popularity all over the world (outside your homeland, Germany), especially in Sweden, where they are numerous. In terms of temperament and to some degree of usability, the dachshund is similar to the hound, and in appearance it resembles a short-legged hound. Nowadays, lovers of this breed often forget about it, that the dachshund is a working dog by origin. So if it is to retain its value, the breeding material should be selected from this angle also by non-hunting amateurs. When buying puppies, priority should be given to the offspring of dogs that have passed the vole or hound exam in practice..

A utility dachshund must be resilient and, despite its short legs, must be a persistent runner as a hound and searchlight or even a beagle, have an inborn passion and a keenness to predators, strong and healthy teeth. Besides, he should not be deprived of his skills and independence. This independence, it makes it difficult to control the dog and has a negative effect on discipline, but it has to do with his work.

The dachshund is not only there ,,individualist”, but you could say ,,personage” canine lineage. With all of this is connected his hunting ability and loving affection for his master. And finally, one more note - the dachshund is supposed to be a short-legged dog, but not crooked legs due to past rickets. You have to remember this, that it is sensitive to moisture, chill and draft.

An elderly dachshund, when it is less mobile, has a tendency to gain weight and related to it poor metabolism, and also to the paresis of the posterior part of the body. So you should take him for walks every day, even when he himself does not demand it.

General impression. The dog is short, short-legged, about elongated, but a compact figure and strong muscles. Head carried boldly, almost defiantly”, with an intelligent expression. Despite the short limbs in relation to the length of the body, it cannot have the silhouette of a weasel or limited mobility.

Head. Elongated, Viewed from above and from the side, tapering evenly to the tip of the nose, sharply scratched, dry. Only flat arched in the cerebral part, with a slight leading edge (the smaller the more typical), passing into the nobly formed bridge of the nose. Supernal arches are clearly marked. Nasal cartilage and the tip of the nose long and narrow. Close-fitting lips, not deep and not shrew-pointed, corner of the lips slightly pronounced. Nostrils open. Mouth opening wide, "Cut” all the way beyond the eyes. Teeth strong and mandible. Canines strong and closely overlapping. Forceps bite and scissor bite are assessed equally. Medium-sized eyes, oval, set on the sides of the head, with a favorable, not harsh expression, shiny dark red-brown to black-brown - regardless of the color of the coat. Clear eyes, fish or pearly in gray and spotted specimens are not desirable, but they are not considered a major drawback. Ears set high, not very forward, quite long, but not too much, nicely rounded, not narrow, not pointed or wavy; busy. The front edge fits snugly against the cheek.

Neck. Pretty long, muscular, dry without any folds of the skin forming a dewlap, gently curved at the nape of the neck, carried freely and high.

Torso. The front is adapted to grueling underground work, muscular, compact, deep, long and wide. Withers high and long. The ridge in the area of ​​the thoracic vertebrae is horizontal, and slightly arched in the lumbar region. The brisket is strongly marked, so much protruding, that pits are formed on both sides of it. Viewed from the front, the chest is oval, viewed from above and from the sides - roomy, provides enough space for the heart and lungs. The ribs extend far back and gradually merge into the belly line. Croup long, round, strongly muscled.

Front limbs. The shoulder is long and sloping, with hard and plastic muscles, tightly attached to the chest. An arm as long as a shoulder blade, at right angles to it, with strong bones and strong muscles, close to the ribs, but not without freedom of movement. Short arm, bent inwards as little as possible, the front and outer sides are covered with hard and plastic muscles; this length, to the distance from the ground (dog clearance) to the lower line of the torso was roughly equal to 1/3 the height of the dog at the withers. Elbows slightly closer to each other than the shoulder blades. Pastern seen from the side, neither steep nor leaning forward. With the correct length and angulation of the shoulder blade and arm, the front leg, viewed from the side, covers the lowest point of the breast line. Feet hard and well arched, with strong pads (soles). The toes are always tightly closed, clearly arched, with strong claws and flexible pads. Of the five claws, four touch the ground.

Hindquarters. Pelvis not too short, quite strongly developed, situated moderately oblique. Thighs strong, quite long, set at right angles to the pelvis. Buttocks rounded. Knees wide and strong. The lower legs are short compared to the lower legs of dogs of other breeds, set at right angles to the thigh, strongly muscled. Wide ankle joint with a strongly pronounced heel. Metatarsus long, mobile in relation to the shin, slightly bent to the front. The paw is supported by the entire sole on the ground. Four, tight and nicely arched fingers, like the forepaws. Nails short. Hindquarters completely straight when viewed from the rear.

Tail. Set at the height of the spine, forming its extension without much bending.

Varietal features of dachshunds. Dachshunds are bred in three types of coat - short-haired, wire-haired and long-haired. They should all correspond equally to the above-mentioned pattern. Varietal features will be discussed in turn.