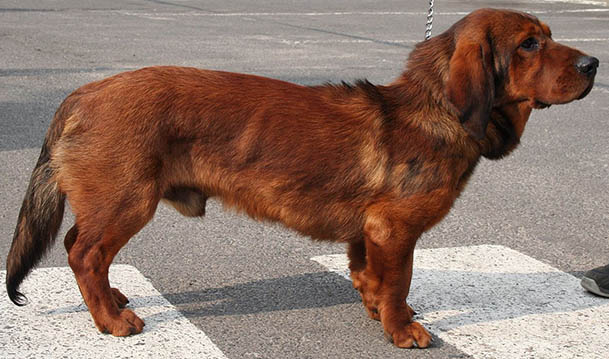 Pattern entered in the FCI register under the number 254

Among the German breeds, apart from the Dachshund Dog, the Westphalian Dachshund Dog was also included here (reg. FCI 100), Bavarian Mountain Hound (already discussed in 5 group) and Wachtelhund. Both the Dachsbracke and its Westphalian variety are regional varieties of the short-legged beagle, was established in the regions, which used to be banned from hunting with hounds, but without limiting the use of dachshunds. An intermediate type was created and, in line with the construction of the German language, it was called the compound word "dachshund” or badger beagle. These dogs, neither before the war, neither have they appeared with us now. So I will limit myself only to a general description. The Dachsbracke vividly resembles a dachshund with higher legs - 34-45 cm tall. Black and tan or red with a black mask. It is a fox and hare beagle. The same purpose is served by the loudly chasing Vestial variety with a similar silhouette, but smaller (30—35 cm). Red to yellow ointment with black saddle pad or patches and a white breast, paws and the tip of the tail.

Seems, that the inclusion in this group of the German dog Wachtelhund is rather a mistake resulting from this, that they did not want to assign him or to pointers, and even less so to English spaniels. However, he is more of a scarecrow (height 45-52 cm). Long-haired, brown or spotted or spotted. It is suitable for bushes and rummaging as well as a retriever on land and in water. Therefore, the greatest contemporary German cynologist, Dr. Schneider-Leyer, rightly calls him the German.

Austria has three types of hounds: Austrian, Tyrolean and Styrian (wirehaired), France as far as 5 groups of over 20 different varieties with all possible types of coat and color, and too much 4 regional varieties of bassets. None of them reached us.

Also Greece, Italy, Norway, Portugal and Sweden entered their races, some of which could fit within the Polish Hound standard. The Portuguese hound deserves a special mention, with a rather greedy silhouette and erect ears. It resembles drawings or sculptures of ancient Egyptian greyhounds or hounds.

Interesting, that Switzerland, despite the small area of ​​the country, has 7 hounds, including one wirehaired hair. This is what former Yugoslavia also reported.

This group also includes the South African Rhodesian Ridgeback (FCI no 146), which serves, among others. to surround lions. It is a fairly large hunting dog (more than 60 cm), shorthair, yellow-red. Its characteristic feature is a strip stretching from the nape to the base of the tail, covered with hair growing in the opposite direction, creating unusual, a "brush" typical only for this breed