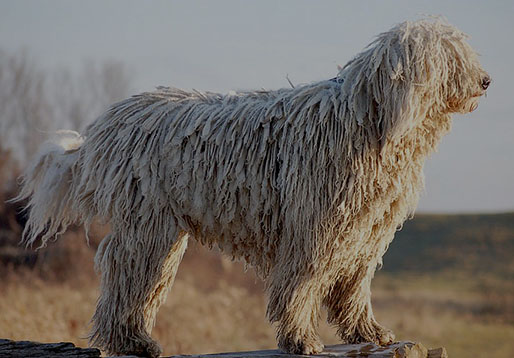 Hungarian pattern entered in the FCI register under the number 53b

According to Hungarians, he is considered not only a good watchman, but also for a clever and easy-to-train dog. This is understandable, because the komondor, Shepherd dog, through centuries of coexistence with man, he had to acquire the desired features. As a guardian of the farmyard and herds, the adult dog is balanced, brave and very attached. He is completely devoted to his master. However, he attacks strangers with passion, especially when he is forced to defend himself. His anger can only be somewhat smothered by gentleness. Thanks to these qualities, a komondor, guarding the herd of grazing animals, performs the functions of a guardian and protector, especially against predators. He shows fearless courage towards both predators and dogs.

General impression. A large dog with a charming silhouette, inspiring admiration and respect, and sometimes fear. Not willing to caress. Build strong, which is further emphasized by the robe - long, obfita, skoltuniona and spilśniona. The head gives the impression of a ball of hair raised above the level of the body. The tail is pendulous. Perfectly beautiful robes are rare. The dog shows great courage in guarding herds. He attacks without barking. I feel in my own area, on which no stranger can set foot. He is distrustful. During the day, the Komondor likes to sleep, but his sleep is not deep, interrupted by reaction to external stimuli. At night, the Komondor is in constant motion.

Head. Wide, but subtly modeled, in proportion to the body, despite the long, abundant hair. The cerebral part is convex, longer than the muzzle. The leading edge is distinct. The head is broad between the zygomatic gaps. Well developed supracranial arches. Angular muzzle, strong, of moderate length. The lower jaw is strongly muscled. The nose is blunt, rectangular cut at the end, black; the same color of the lips and the edges of the eyelids. Teeth very strong, with a regular scissor bite. Lips close fitting to the teeth, frayed at the corners. Simple-framed eyes, dark brown. Eyelids tightly fitting. Medium-sized ears, set high and at the base, pendulous, U-shaped.

Neck. Moderate length, rather short, without dewlap and ruff; carried at an angle of 35 ° to the horizontal. In an uneasy dog, it forms an almost direct extension of the backline.

Front limbs. Long and shaggy hair is very difficult to assess the limbs properly. Shoulder blades are slightly steep and tightly connected. Their outer surface does not stick out from the chest - wide, forming the basis for freely seated limbs, widely spaced, but well related to the torso.