The ducks are very clearly sexually dimorphic. The male has very colorful plumage and a greater body weight than the female, which, moreover, is modestly colored. The contrast is especially noticeable in the period from October to June, when they take on mating plumage. The ducks are moulted twice a year. During or at the end of summer, after the nesting period, the plumage is completely renewed. The ducks drop their flight feathers completely, which prevents them from flying for approx 3 months. Males moult first, females after hatching eggs. During this period, males are similar to females. Some time after complete washout, in the fall and winter months, some parts of the cover plumage renew and the duck takes on a colorful mating plumage, which it keeps until the next moulting. The krakwy drake has the dullest plumage among surface ducks. Its low-contrast coat is only slightly more colorful than that of the female.

Krakwa nests almost all over Europe and Asia, in the same places as the crossword puzzle, however, it is not as high. Between April and June, the female lays in a nest that is lined with dark fluff 6 do 14 gray-green or cream eggs. It incubates for 26-28 days. 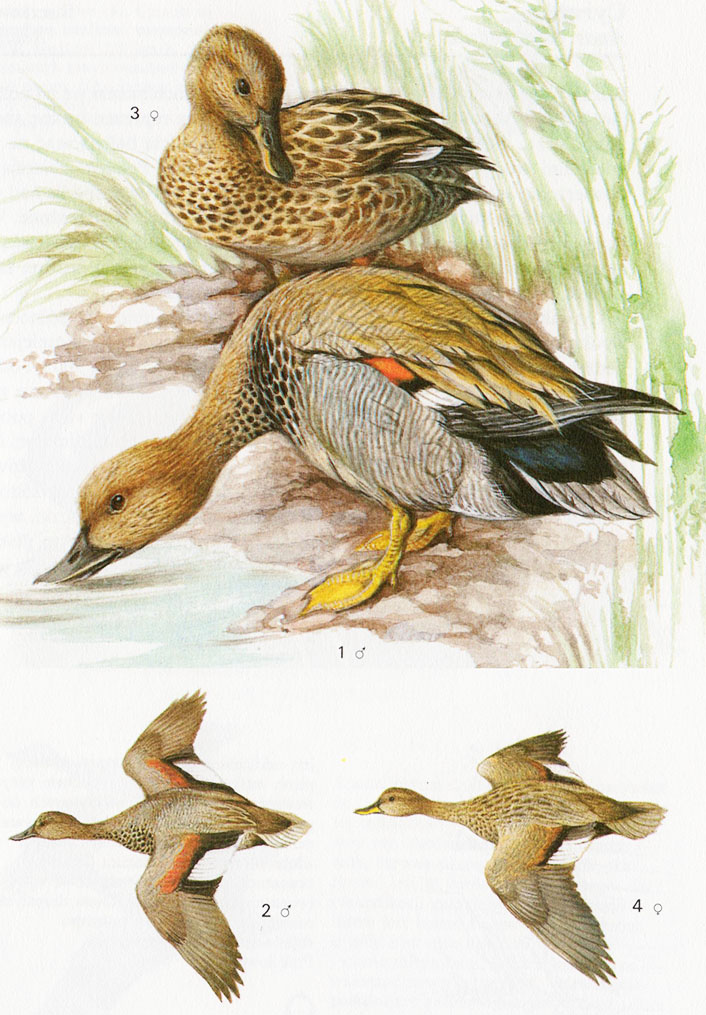 Krakwa is smaller than the crossword puzzle. Its modest plumage is dominated by gray-brown color. The male's head is brown, gray back, the sides are edged with white. The rump is black (1). At rest and in flight (2) white rectangular mirrors fringed in black and brown are visible on the wings. There is also a contrast between the gray sides and the black rump. The female's plumage is modest, brown in color. In flight and at rest you can see it, similar to the male, white mirror (3, 4). During the period of the loss of mating plumage, the male resembles the female, but the brown stain next to the mirror makes it always possible to tell it apart. This species eats essentially plant food: leaves, shoots and buds of aquatic and coastal plants, sometimes with stalks of cereals. Crackle catches some animal food from the water. Game bird.