The corvids are the largest birds of the passerine order. They are distinguished by high "intelligence" manifested by great caution and distrust, and the ability to imitate the voice of other animals or humans. The raven lives in Europe (except for the central regions), part of Asia and North Africa. It is the largest representative of the crow family. In the Middle Ages, and also in the following centuries, the raven was common throughout Europe, but he was persecuted for the damage, which he was believed to do in small game. Besides, he was considered a disgusting bird, because it ate on carrion. Gradually, the raven was forced to flee into the mountains and inaccessible forest regions. Recently, the number of ravens has increased slightly, they reappear in the regions, that have long since left. Today, the species has become common again in the Alps and the Western Carpathians. Raven, as a settled bird, builds a nest on high inaccessible rocks or on the tops of the tallest trees. He is monogamous. It shares the nest with the female for many years. The couple returns to the nest in spring and starts repairing it, avoiding the possible presence of a human. The male provides the building material (boughs, branches, grass, mech, hair), and the female mends the nest. Thanks to this annual work, it reaches enormous dimensions after a few years: may have 1 m in diameter and the same depth. 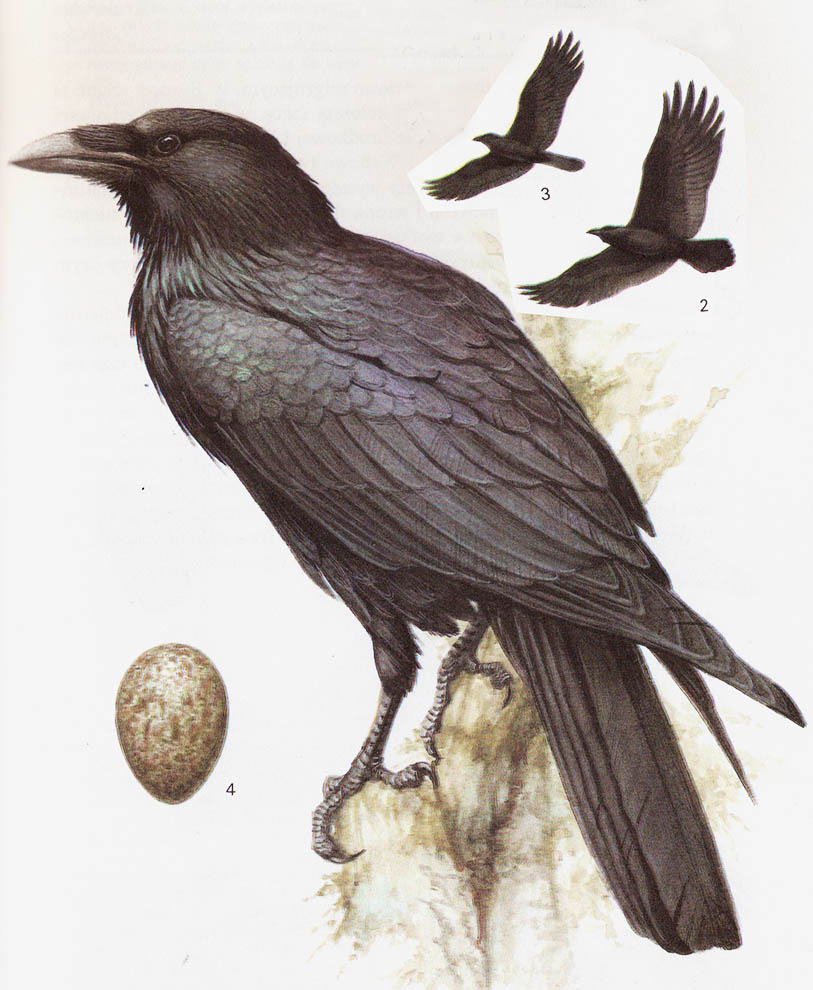 The female endures 5 do 6 jaj (4), which incubates for 20-23 days. Sizes pot they are almost identical to the common buzzard. His body weight is 1 do 1,5 kg, height 50 cm, a wingspan of approx 1 m. Its truncated wedge-shaped tail is visible in flight (2). The long and wide wings allow the raven to soar in a manner similar to that of prey: makes wide circles and tightly takes turns. His completely black robe glows metallic purple (1). The raven is strong, quite thick beak allowing it to catch small prey, and, if necessary, effectively defend ourselves. It differs from the crocodile in size and with a wedge-shaped tail (3). Protected species.