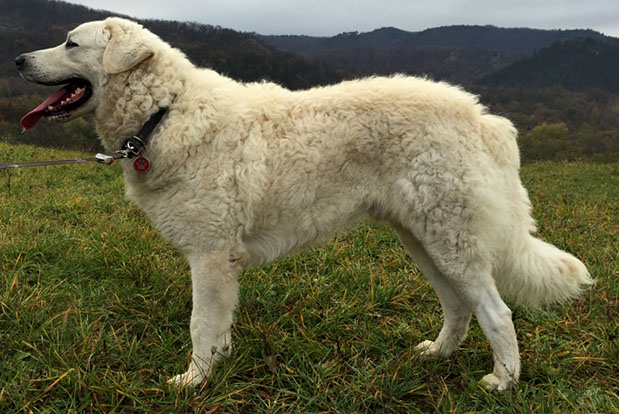 Hungarian pattern entered in the FCI register under the number 54b.

The Kuvasz is similar to a komondor and has an equally impressive appearance. In earlier times, a kuvasz was kept next to a komondor to protect the herds from predators. Later, however, its function was limited to guarding the yard and it is now suitable for this purpose.

General impression. A dog of large height. Alluring silhouette, combining nobility of construction with strength; harmonious proportions - neither dog nor elongated, neither stocky. Umięśnienie search, strong skeleton, but not fat. Dry joints. Deep chest. Limbs regularly positioned. The silhouette does not differ much from the square. The teeth are massive. Abundant coat, undulating, white ointment. He is a faithful and perfect guardian, but not caressing. He has a good sense of smell. It was also used for hunting wolves and wild boars. He is extremely bold and brave.

Head. The most charming element, combining noble features with strength. The cerebral part is elongated, but not pointed, wide at the top. The forehead is long, moderately arched, with a clearly marked longitudinal furrow extending to the muzzle. Supraocular arches moderately developed, leading edge moderately sloping,, wide. Angular muzzle, wide, long and muscular. Narrowing nose, but not sharply ended (dull), black. Teeth well developed, strong, regular, scissor bite. Black lips close to the teeth, frayed at the corners. Slanted eyes, almond shape, dark brown in color. A gaze often reveals a certain wildness. The edges of the eyelids are black and close to the eyes. Ears set on a horizontal line, broken at the root. In the upper part, they lean back from the head, below it adjoin it. In tension, the ear rises, but not quite. The pinna is shaped like a dull V.

Neck. The average length, rather short, strongly muscled, no dewlap, it forms an angle of 25-30 ° with the horizontal. Short neck.

Front limbs. The great depth and not too great width of the chest favor the oblique position and length of the scapula. Elbows do not come under the rib cage, but neither do they swing sideways. From the elbow, the legs are straight and vertical. Long under-arm, with dry muscles, the muscles move from the wrist to dry and strong tendons. The hock forms a 45 ° angle to the horizontal. Forelegs not too wide apart and straight.

Hindquarters. Set straight. The angle between the pelvis and the thigh is 90 °, between the thigh and lower leg 110-120 °, 130–140 ° between the lower leg and the foot. Thigh and lower leg: Strongly muscled. Wide ankle joint, long, big. Vertical walk. Metatarsus is steeper than the pasterns. Feet with tightly closed toes, there is little hair between them. Flexible soles, tight. Nails well developed, gray-slate color. Dewclaws (dewclaws) as undesirable should be removed. Hind feet longer than the front feet.