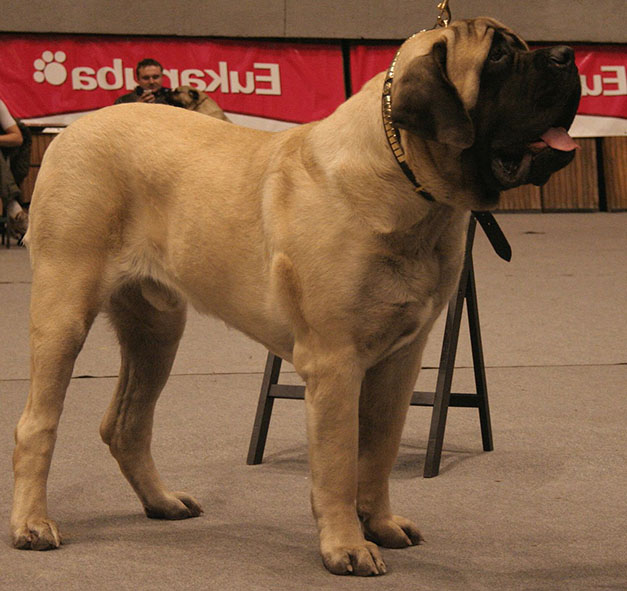 He is the most powerful European dog. It most closely resembles the Assyrian molosser and Roman fighting dogs. At exhibitions, it usually appears in single copies, because there are few farms that keep such a colossus.

General impression. Big dog, massive, powerful, harmoniously built - combination of greatness with gentleness and courage with skill. The head looks angular when viewed from all sides. Its desired width is proportional to the length - how 2 : 3. Massive torso, wide, deep, strongly built, resting on limbs wide apart and set squarely. The muscles are clearly defined. Size is of particular importance, but in combination with other features. It is very important to harmonize height with body weight.

Head. In the cerebral part, it is wide between the ears. The forehead is flat and wrinkled with strained attention. Eyelids slightly raised (an overhead bow), the temporal and cheek muscles are slightly marked. A furrow runs along the cranial vault, beginning with the crease between the eyes and running almost to the middle of the head.. The face party (mouth) short, wide, almost square and truncated under the eyes, makes almost a right angle, deep from the nose to the lower jaw. The mandible is wide along its entire length. Broad nose, flat; viewed in profile, it is neither sharp nor upturned, with wide open nostrils. The lips form an obtuse angle with the nasal septum and are slightly pendulous, therefore they have an angular appearance in profile. The ratio of the length of the muzzle to the length of the entire head as 1 : 3; head circumference ratio (measured in front of the ears) how 3 : 5. Small eyes, widely spaced, separated by a space at least a pair of eyes wide. The septum between the eyes is clearly marked, but not too harsh. Dark hazel eye color; the darker it is, the better. Third eyelid not visible. The ears are small, thin, widely spaced, seated at the highest point on the side of the head, being, in a way, an extension of its level line. When the dog is calm, they lie flat on the cheeks. Canines strong and set wide apart; incisors equal or lower slightly protruding in front of the upper ones yes, that they are not visible when the mouth is closed.

Torso. Chest broad, deep and low set, between the forelegs. Ribs arched and rounded. The pseudo ribs extend far back and deep, all the way to the hips. Chest circumference o 1/3 greater than the height at the withers. Back and loins broad and muscular, flat, very wide in bitches, slightly arched in dogs. Flat flanks. The back is wide and muscular.

Tail. It reaches up to or slightly below the ankle joint, thick and tapering at the end; hangs straight in a relaxed dog, erected in excitement, however not above the ridge.

Robe. Short and close fitting, but not too delicate on the shoulder blades, neck and back.

Ointment. Peach or silvery, fawn or dark brindle. Kufa, eyes and nose required black. The rims of the eyelids are black. Black widening around the perimeter.

Body dimensions. This pattern does not take this data into account. Height at the withers is practically required above 75 cm. The larger the overall harmony of the figure, the better. Mass over 75 kg, but there are specimens weighing more than 90 kg.