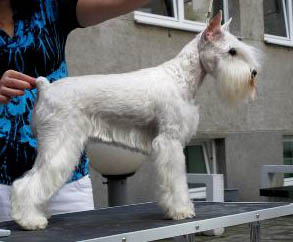 The miniature bearded man is a reduced image of the middle bearded man (sznaucera) without the mistakes of a dwarf (the thumbnail is not the same as dwarfing). He is characterized by persistence, fearless courage and vigilance. These qualities of character make him both a nice lapdog, like a watchman and companion dog. Due to its height, it is especially suitable for small apartments. Overall, his character corresponds to that of a schnauzer, however, he has the temperament and manner of being typical of miniatures.

In breeding these dogs it is very important to keep the coat rough; it must not be silky. The most common color of miniature bearded men is the so-called. pepper–salt. Black specimens are very rare in Poland.

The details of the standard of this breed are literally the same as for the average bearded man. The only difference is of course the limited growth between 30 a 35 cm.

Worth knowing, that miniature bearded men are popular not only in their homeland, but mainly in the USA.

Recently, the black-silver variety has been recognized as a separate breed. This variety has a black cover and lining with a silver-gray to white mark. Points above the eyes and on the muzzle. Bridge of nose black, silver-gray dewlap and breast, metatarsus and anus. Location of the marks is similar to that of a black and red pinscher, but not so clearly delimited according to the length of the hair. The outer side of the thigh, neck and sides should be black.