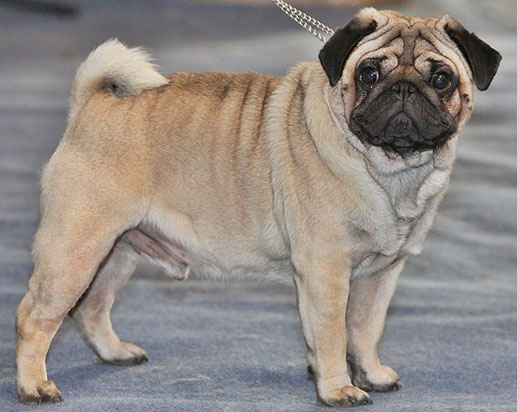 I also include the pug in the group of Asiatic dwarfs. The view of some authors does not seem correct to me, who derive him from fighting dogs and recognize him as a bulldog's cousin. First of all, he differs from fighting dogs in his disposition. The origin of the pug has yet to be conclusively clarified. In Europe, it originally performed in the Netherlands, where he was probably brought from the Far East. In the country of windmills, it has become so popular, that it was considered the coat of arms of the Orańczyk party in the 17th century, while the opposing party - the republicans - adopted the spearhead as its mascot. This fact speaks for it, that the pug must have been known before, and even popular; because it's hard to imagine, to be introduced in the coat of arms as an emblem of a new and little-known dog.

Short-legged dogs with a curled tail have long been the ideal of the Sino-Mongolian luxury dog; next to the long-haired variety there was probably also the short-haired variety.

Already in the Middle Ages, this breed was popular at the ruling courts. For example, they appear in portraits from the times of William of Orange (1533—1584). The Hampton Court Picture Gallery features a portrait of King George III of England (1738—1820) with a pug. Also in the portraits of Madame de Pompadour (1721—1764) the pug was immortalized as her favorite. He was also very popular in France during the reign of Louis Philippe (1830 —1848). Alexander Dumas in his memoirs on a journey to 1838 r. tells about a pug from Monaco. French name for these and the breed ,,carlin” purportedly comes from actor Carlo Bartinazzi (ur. 1783 r.), who became famous as a harlequin under the pseudonym "Carlin”. W XVII w. you meet a pug in Venice under the name of 'mascherino” (mask).

Our name "pug” it was adopted - through German - from the Flemish "moppen."” (make faces, make grimaces). From the mid-nineteenth century. The pug is losing popularity across the continent. On the other hand, in England it was preserved in 2 types of "morrison” - bright, in warm tones and "willoughby" - dark with black coatings. In the second half of the 19th century. both types mixed, the dominant color was peach or isabella with a black mask, ears, a spot on the forehead and a dorsal stripe from the occiput to the tail. In year 1886 the first black specimen appeared, which variety in England has grown immensely in popularity. It must be said, that this breed is very even, and the individual specimens differ very little from each other. Even in the ointment - except the fawn, i.e.. gray with pigmentation more or less reddish and gray to black, there are no others. There are also no patches, speckling or arson or any other meaning, what is given in the pattern. Pug ointment is practically fawn (with a more or less distinct reddish shade), be black, the breeding should be kept in mind, that black is the dominant feature, and the fawn recedes (crossing black and fawn will give black offspring in the first generation). Therefore, in order to maintain varietal purity, it is necessary to know the full pedigrees of both partners, if it is intended to determine the probability of the outcome in advance.