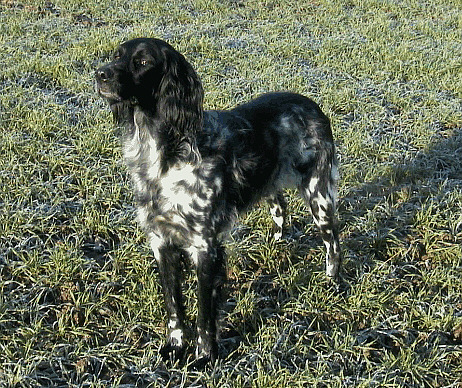 We distinguish 2 varieties of the same breed: large munsterlander and small. The Large Munsterlander is a black and white long-haired breed of versatile hunting dog. His pattern is rather laconic. It describes the dog as a long-haired 58 pointer. 62 cm at the withers. Black and white spotted coat. Black undesirable, and the white-and-brown spotted patch is no longer allowed. Noble head required, narrow, dry muzzle. Shortened tail, carried horizontally or slightly raised. Long and straight or slightly wavy hair, on the legs forming a feather. This breed is not bred or exhibited here.

Little Munsterlander, also called Heidewachtel or Spion. it is similar to a flaker, however, it is a pointer (legate), because he is endowed with an inborn stand-up collar.

General impression. A strong dog with a noble line.

Head. Noble, dry, slightly arched, part of the brain and not too wide, leading edge slight. The expression of the head determines the type. Dying silna, long, straight. Lips (fafle) tight fitting, short. Brown truffle; bright spots on the nose are faulty. The ears are wide and set high, tight fitting, tapering at the end, reaching further than the end of the lips. The eye is as dark brown as possible. The eyelids fit tightly to the eyeball, they cover the conjunctiva.

Neck. The average length, slightly arched in the neck, muscular.

Tail. The average length, with a long banner, carried straight, w 1/3 may be slightly bent upwards from the end.

Ointment. Brown and white, roan; arson allowed (the so-called. the meaning of Junklaus).