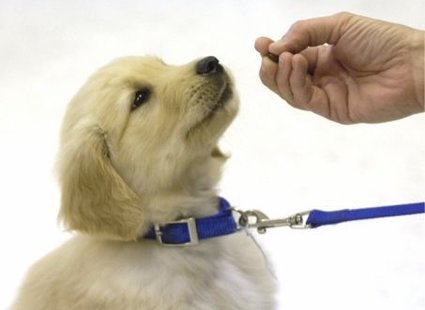 Teaching your dog not to eat.

Every dog, especially utility, should be taught not to accept food outside a designated place and not to be served by strangers. This will avoid the risk of poisoning the dog or even its disease as a result of eating spoiled or contaminated food.. Many authors emphasize, that the dog should only be fed by its handler. This is undoubtedly a good thing, but not necessarily and not always compatible with existing conditions.

Natural drive makes, that the dog wants to eat any food, who will find and who will release”he is alluring. So to suppress the dog's innate greed, he should be fed to his heart's content at the right time and place; besides, you have to make an association with him, that taking up food found elsewhere is unpleasant. The only exception is, that it is lawful to eat the food given by the lord's hand.

During walks, you should pay attention to the dog and when it shows interest, e.g.. for bones in the dumpster or something else edible in the road, scold him by sharp ,,fe” with a simultaneous vigorous one-time blow with a wicker rod or whip. When the charge is beyond the reach of the whip, they can be replaced with a chain throw or a slingshot shot, which I mentioned previously.

The punished dog will instinctively jump away from the food; then you have to summon him calmly and stroke him or reward him (another, a previously prepared morsel) too quick return. If the dog hurried and swallowed the forbidden fruit, he should no longer be punished, but just get over it. But with the next temptation, you need to be more careful and react faster at the right moment. But the learning does not stop there, because that would make the following association: only in the presence of the master, picking up all sorts of enticing scraps is combined with distress.

It should be the effort of the guide, that the dog becomes convinced, that every morsel lying beyond the master's hand is dangerous. For this, we use changing, unknown helpers, who in different places both at home, and in the field, also in our absence, they are tempting. As soon as the dog reaches for it, the midfielder hits him. Of course, this is not the case, to give him a "methodical spanking."” holding it by the neck or the collar. One hard blow is enough, after which the dog gives up temptation. The impact must be strong enough, lest the puppy consider it to be teasing him. An association should arise: however, eating a bite would be nice, it's a pity, which the dog exposes himself to, is bigger. This exercise is very educational, because on the one hand, it wean the dog from taking food from both people, on the other hand, it teaches him to be distrustful of everyone, who do not belong to his pack.

Besides, you need to convince your dog, that also all free-lying morsels, regardless of, or found in the presence of the lord, or other people, or not even guarded, they are a source of distress. For this purpose, an assistant spreads bones or pieces of meat in the yard or garden in places known to us, within range of a slingshot, e.g.. from the window of the house. After this preparation, the dog is released into the yard as usual and is watched through the window in an invisible way. As soon as the dog shows the willingness to take a tempting morsel, pains him in the form of a slingshot. Exercise snacks should be that big, so that the dog cannot swallow them right away, and set by strangers, so that the dog does not form an association, that food filled with the smell of the lord is dangerous, another can be taken without risk.

We prepare similar ambushes during walks. Then the hidden helper watches the bait. These could be mouse feet that snap on to different positions by strangers, more and more helpers. The paw should have a blunt latch and a spring not too strong, so that she does not endanger the dog, and just hit him with a very sensitive nose.

Instead of a paw, you can also use an easy-to-perform ambush in the form of a bucket filled with water, properly located, e.g.. on a braid and connected with a bone with a string: the dog, pulling the bone, tilts the bucket, pouring water over itself. The bucket itself should of course be attached this way, so that it does not fall entirely on the dog. A few such experiences will suffice, for the dog to be sure, that it is dangerous to look for food outside the home. It's a good idea to tempt your dog again every few weeks, so that, in case of forgetting previous experiences - recall them and consolidate in it the association of the present food with an unpleasant ambush.