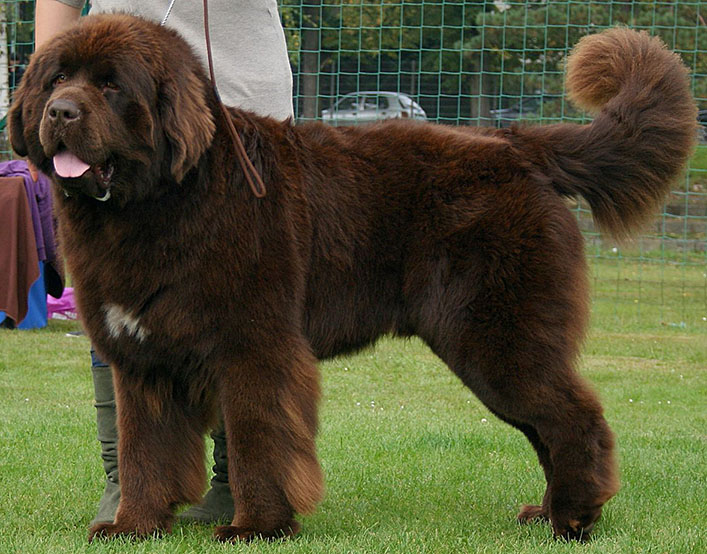 It is undoubtedly an old primitive breed. She became famous thanks to Byron, who had a favorite dog of this breed. In the County of Nottingham, the Byron Garden houses the famous epitaph dedicated to this dog by the poet. The breed was further popularized by the portraits of the English painter Edwin Landseer, whose surname comes from the Latin variety.

Originally, the Newfoundland fishermen served as tireless companions in retrieving items thrown by the sea from the water, and also when casting the web. These dogs are famous as tireless swimmers and in this capacity they could be used in bathing rescue. However, it should be remembered, rescue dogs should be properly trained, that in their over-zealousness they would not damage the trailed drowned candidate. Therefore, a Newfoundlander, as a dog used in water rescue, should be exceptionally gentle and teachable.

General impression. At first glance, it should show strength and high activity, and move freely. Slightly rolling gait is not a disadvantage. Very massive skeleton; however, it should not appear coarse, heavy.

Head. Broad and massive. The occiput is developed. The leading edge is only slightly marked. The muzzle is short, clearly cut and rather angular in shape, covered with short, fine hair. Small eyes, dark brown, rather deeply embedded, set rather wide apart. Eyelids not revealing the flickers. The ears are small, close to the head with drooping lobes, covered with short hair without fringes. Seated equally, far behind. Soft muzzle, teeth well covered with lips.

Torso. Well ribbed, with a broad back and strong muscular loins. Chest deep and quite wide, well hairy; however, the hair does not create a ruff.

Front limbs. Completely simple, well muscled. Close elbows, overlapping low to the bottom. Decorated with a feather to the bottom.

Hindquarters. Very strong, in action free. They are decorated with a light feather. Paws large and well shaped.

Tail. Moderately long, reaching just below the ankle joint; quite thick and very hairy, but not in the form of a banner. In a relaxed dog, the tail hangs down with a slightly bent end, erected in motion, and in an excited dog, straight and slightly bent at the end.

Robe. Flat, dense, rough, inherently greasy and waterproof. Very flexible (combed against the grain, it returns to its natural position).

Ointment. Black as coal. Slight brown or white marks on the chest and fingers are not defects. Other colored specimens are allowed, but white spots are unacceptable.

Body dimensions. First of all, the proportionality of construction is required. Average height at the withers: pies 60 cm, like 55 cm. Mass, respectively, from 40 do 60 kg and from 44 do 48 kg.

Disadvantages. Weak or sway back, weak loins, cow posture. The presence of dewclaws, feet loose or turned outwards. The tail is broken or curled over the back.

Spotted variety (landseerowska). She was recognized as a separate breed and entered in the FCI register under the number 226.

The differences are insignificant and boil down to a slightly lighter build, different color (patches), and less tight garments.

New Walkers, like all big dogs, require very intensive nutrition in their youth, lots of traffic and dry rooms. This breed is worth popularizing in Poland because of the long strip of the sea coast and numerous lakes.