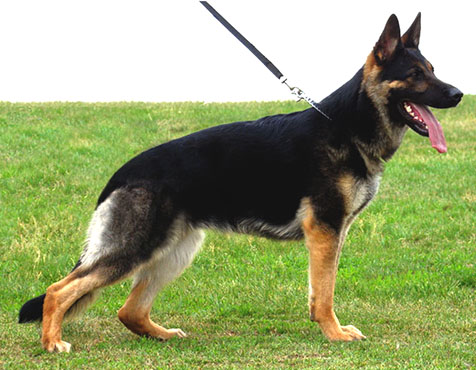 Model entered in the FCI register under the number 166a.

German Shepherd, otherwise Alsatian, it is often mistakenly referred to as a wolf or alsatian. A big merit, if not the main one, it was Stephanitz who made this breed, who wrote a very extensive book about her. It is perhaps the largest monograph on a single race, for having a volume over 1000 pages, more extensive than any other cynology book I know.

There is probably no man in Poland, and even throughout the civilized world, who would not come into contact with a dog of this breed and did not hear or personally experience its intelligence and usefulness in the defense service, police, investigative or pastoral. They are sometimes found in hunting service as moonshine or retrievers. Most often they play the role of home watchmen, factory or farm, and also as military dogs (sanitary, communication, etc.). They also perfectly fulfill the duties of blind guides. They fulfill their functions in every kind of service. They are easy to train, but badly or not at all led, they can become dangerous because of their aggressiveness and tendency to vagrant and poaching. Probably no race has so many extremely intelligent and useful helpers and human companions, but no other race has contributed as much as this to filling the world with various sheep-like-mongrels. Shepherd dog is a service dog, therefore it requires a job that influences his physical and mental development. Who does not have the time or the desire to deal with it constantly, he'd better buy a peace dog; in this way, he will save himself and his surroundings a lot of trouble.

Pattern established for the first time 20 September 1899 r., then after some changes and additions in the years 1901, 1909, 1930 i 1961 finally developed and adopted at the meeting of the Welt-Union der Vereine fur Deutsche Schaferhnde - WUSV - on 30 of August 1976 r. and approved by the FCI under No. 166b on 12 April 1977 r. The template was included in a translation established by the Main Board of the Kennel Club with minor editorial changes.

Origin. German Shepherd (the German Shepherd Dog), whose guided breeding began after the founding of the Association in 1899 r., comes from shepherd dogs occurring then in two varieties: Central and South German. The aim of the breeding was to create a dog breed with high working efficiency. To achieve this, a standard has been established that defines the characteristics of the breed, both physical and mental.

General impression and mental features. A dog of medium height with a slightly elongated body, strong construction, dry bones and strong muscles. Thanks to the correct ratio of the dog's height to the length of the body, as well as good positioning and angulation of the limbs, it is easy to throw its legs forward in the trot and is very durable at the same time.. It has a coat that protects it well against the influence of weather conditions. The characteristics of the sexes should be very clear. You should strive to form a nice external appearance of the dog, provided, that it will not affect its value in use.

The corresponding appearance of the German Shepherd Dog shows inborn strength, agility and maneuverability in motion, and nothing less in the equilibrium achieved with good proportions, nothing to add. His way of moving and behaving is indicative of his physical and mental health, which enables him to be extremely durable and always ready to perform the tasks of a working dog. Only an experienced specialist can tell, whether the dog has the performance characteristics required of the German Shepherd. Therefore, it should be decided by special judges, who are obliged to check the mental characteristics of the dogs seen at the inspection, including their reaction to the sound of the shot. Only such German Shepherds may be considered excellent for qualification for breeding, which show some degree of training.

Despite its exuberant temperament, the German Shepherd Dog should be willing to be submissive. It adapts to any situation, willing to perform the task assigned to him, be bold and persistent in defending your guide or his property. At the guide's request, he is willing to attack, but in general he should be vigilant, but an obedient and kind companion at home, behaving calmly in relation to his familiar surroundings, especially children and other animals, and restraint towards people. Its general withering is an expression of natural nobility and an awe-inspiring calm disposition.

The distinctive psychological features of the German Shepherd Dog are: healthy nervous system, observation, restraint, submission, vigilance, attachment and "incorruptibility", besides, a tendency to fight, boldness and persistence.