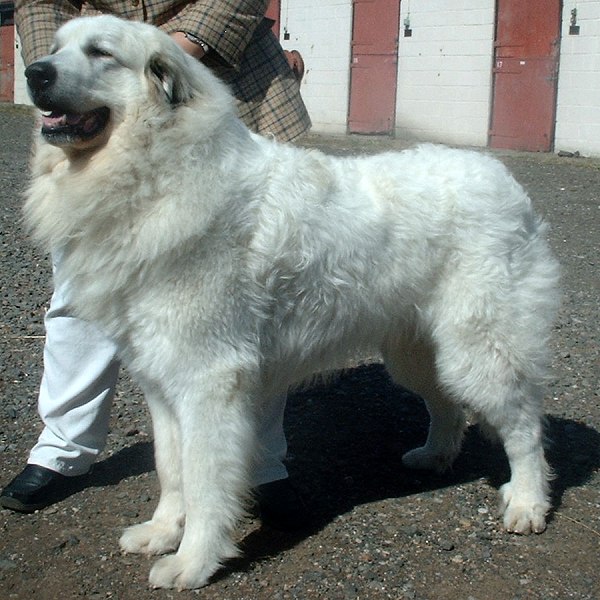 It is a great specimen of a former shepherd dog, today a defender and representative. Similar to Italian maremmano, and also to Kuvasz and our Tatra Sheepdog, but it is bigger, grander and more majestic, as befits a representative watchman and defender of once feudal castles. Currently, the population of the Pyrenean dog is not very large, but he has followers in various countries, and found his second homeland in the USA.

General impression. Big dog, stately, with strong bones, but not without a certain elegance.

Head. Not too great for the whole body. Flattened on the sides, roof arched at the top, little rounded. The leading edge is only marked, It turns gently into a wide, rather long muzzle and slightly tapering at the tip. Lips slightly pendulous, they cover the lower jaw tightly - black or very dark, just like the palate. Black nose. The whole thing resembles the head of a brown bear, but with drooping ears. Rather small eyes with intelligent and focused expression, brown-amber. They are framed with close-fitting and slightly slanted lids, with black borders. Pendulous ears, set at eye level, quite small, with a triangular shape, rounded at the end, adjacent to the head with turbinate lobes.

Neck. Strongly built, quite short, with not very developed dewlap.

Torso. Withers broad and muscular. Chest not too low, but wide. The ribs are slightly rounded. The ridge is quite long, wide and strong , Croup gently truncated or sloping back. Hips quite prominent.

Tail. Pretty long, profusely hairy; the hair forms a putty. Abandoned in a relaxed dog, curled at the end, significantly elevated in an excited dog (forms a circle, as the Pyrenees highlanders say).

Robe. Hair plentiful, flatly attached, quite long and simple; the longest on the tail and around the neck, where they can be slightly undulating. Na „portkach” softer and slightly wooly, create abundant fur.

Ointment. Uniformly white or spotty. Gray spots, badger, yellow, fawn or wolf on the head, the ears and at the base of the tail. The most valued spots of badger ointment. A few stains on the torso are not considered a defect.

Disadvantages. Head too big and heavy, convex forehead, leading edge too pronounced. Teeth defective, Undershot mouth. Round eyes, too bright or too prominent. The eyelids are pendulous, under-pigmented eyelids or nose. Lips too pendulous. Long ears, hairy. The tail is poorly hairy or carried poorly. Short or curly coat. HINDQUARTERS: steeply angulated. Ointment different from the given standard (indicates the impurity of the race - hybridization). Less than minimum height or weight. Heaviness, resemblance to St. Bernard, nowofundlandczyka lub leonbergera. The disqualifying feature is also the lack of double dewclaws on the hind legs.

I can't help but pay attention here, that the last objection seems to me unjustified from the point of view of the advisability of maintaining the characteristics of a service dog, what is the Pyrenean dog.

In addition, there is a local breed of smaller Pyrenean dogs (growth below 55 cm), fulfilling the role of shepherd helpers, with gray and spotted varieties. It is entered in the FCI register under the number 138a, included in the first group, but not found at shows. Both of these breeds were reported by the French, but the Spaniards also claim patronage.