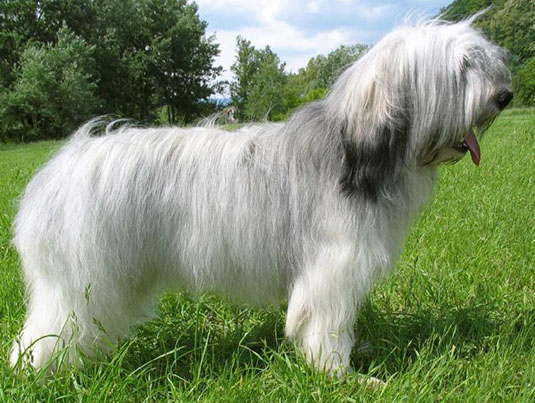 Pattern entered in the FCI register under the number 251a

I am happy to say, that all the cynologists in the country, and also many abroad, who met the Polish Lowland Sheepdog agree, that he is definitely a Polish breed.

"You praise others, you don't know yours ”- this proverb can also be used in cynology. Many exotic breeds have been introduced to Polish homes not always in accordance with the slogan "the right dog in the right place”. In the interwar period, the Service Dog Lovers Society became interested in dogs that appeared in large numbers in some rural districts. They acted as guardians of the farmyard and shepherds' helpers when grazing sheep or cattle. Psych, of average height or slightly below average height, They were distinguished by remarkable skill and intelligence. They began to appear at dog shows, organized by the Polish Purebred Dog Breeders Association, and occasionally at agricultural exhibitions among farm animals. They also appeared, though not in number yet, in cities as peace dogs.

These humble beginnings were completely destroyed by the war. All traces of the activity of cynologists aimed at establishing the breed and documenting its breeding were also destroyed. However, the dog survived as the original companion of the farmer, which he had served for centuries.

To, that the Polish Lowland Sheepdog came from the farm yard to the show rings and was finally entered into the FCI register as a recognized breed, is the merit of the Bydgoszcz Branch of the Kennel Club under the then management of President Urbl and Mr.. Maria Dubrowinowa. But before that happened, elapsed 15 years of selecting quite a diverse population brought to the first reviews and exhibitions, from which an elite group of dogs was obtained. At first, we were not very aware, in which direction should the original type be improved. How often is it in life, a coincidence decided about the fate of the breeding. First, the theoretical interest of the judges and. cynological activists found their implementer in the person of Dr. Danuta Hryniewicz, who devoted herself with all her energy to a difficult task, then still underestimated, and therefore ungrateful, manufacture from the so-called. country mongrel of a uniform breed. The second favorable circumstance was this, that her kennel included the unforgettable "Smok z Kordegardy” - a dog with an ideal body structure, unifying all the desired features of the pattern, not yet established at that time, but rather only in sketched discussions. The dog therefore became a model, role model for breeders and lovers of this breed.

A further happy coincidence was, that the Dragon was an ideal not only in terms of conformation, but also mental qualities, what you wish for a companion dog. And finally, most importantly, turned out, that he was not only phenotype perfect, but also in the genotype, for he faithfully passed on his qualities to his posterity. Therefore, a risky experiment in inbreeding, and even incest by mating his own daughters with him or joining couples in breeding, in which the Dragon repeated himself as the father, relatively grandfather, contributed to the very rapid alignment of the racial type. The result of these breeding treatments was dispatch 9 Polish Lowland Sheepdogs for the world dog show in Brno in 1965 r., where they obtained 9 excellent grades and 2 CACIB i 2 reserve CACIB, so the maximum of it, what could be obtained. Also at the World Expo in 1971 r. in Budapest, The representative group of Lowland Sheepdogs sent at the expense of the association aroused the interest of visitors and judges.

Outside the country, this breed is bred in Germany, The Netherlands and Belgium; single copies found fans in Hungary, in Switzerland and Italy.

So our sheepdog, for now having put forth ambassadors of his race, set off to conquer the cynophile world.

Initially accepted, that the Polish Lowland Sheepdog can occur in 3 varieties that differ in height: big, medium and small. In practice, however, all the attention and effort in breeding was given to the middle shepherd. It was also correct, because the big type, incidentally very rare, would not be in harmony with the limited area of ​​our apartments and would not be a comfortable "dog-tourist" accompanying his master in the car. Moreover, the large type did not differ much from the Old English Bobtail, thus breeding a dog of a similar type would not make sense. The little sheepdog, on the other hand, was too small, to lay claim to the title of a working dog. Besides, specimens of this type found at the shows raised doubts, are not related to the Maltese. Therefore, the focus was on medium-type breeding.