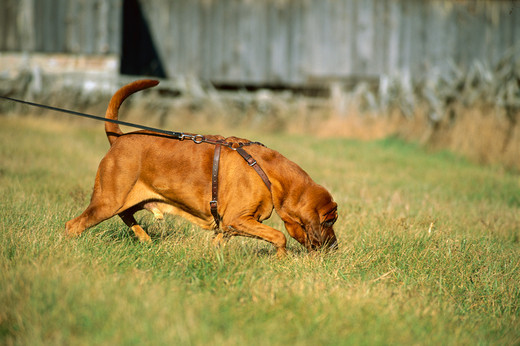 The dog's olfactory work is the most interesting area of ​​dog-human interaction, to whom it gives the opportunity to extend the scope of his observation with the help of the animal's sense of smell. For us, the dog is, in a way, a tool to observe the phenomena of nature, very little or not at all by our senses. However, in order to use a tool effectively, you must first know its structure and scope of operation.

Apart from the theoretical issues of conscious reception of impressions by humans and dogs, it is worth recalling, that the sense organs are composed of elements that act as links to receive physical and chemical stimuli from the external environment and transmit them to the central nervous system. The first such link is the nerve endings in the mucosa of the nasal cavity; the second - olfactory nerves conducting the received stimulus; the third - the olfactory center in the brain.

The researchers tried to determine the degree of sensitivity of the dog's nose to particular smells. The dog has an odor that is sensitive to natural scents of organic origin, especially animal. On the other hand, it is less sensitive to odors of inorganic origin, the so-called. chemical fragrances. I tak up. The Menzels pass, that a dog is five times more sensitive to the smell of blood than a human being, which, on the other hand, is ten times more sensitive to smell, e.g.. vanillin. However, further research showed, that through appropriate exercises, the dog can be sensitized to smells outside the sphere of his natural interests. Here we come to the heart of the issue.

Pies, working on the tracks, he undoubtedly carries out intense mental work. The guide should draw a conclusion from this, that in the work of olfactory one must never force the dog, You know, that only automated manual labor could be forced by threats, while for independent thinking, requiring concentration, any fear, so the action of threats has the same inhibitory effect on a person, as well as the dog. The student can be persuaded to think independently - in this case to olfactory work - only through encouragement and stimulation of interests, that is, by appropriate upbringing.

Besides, it still has to be explored, are the individual senses of the dog suitable for the fulfillment of the tasks required from him and if there are any particular reasons hindering the work at the moment.

I mentioned the examination of the dog's sense of smell earlier. However, there is a possibility, that dog, gifted with a good sense of smell, he is currently unavailable due to rhinitis (the so-called. Qatar), nervous weakness, physical or mental fatigue (e.g.. very difficult work on a difficult track, especially in times of drought), There may also be another reason, e.g.. intense foreign smell, suppressing the smell of the trace or, finally, mental depression caused by the fear of an upset guide, unknown surroundings or noise. All of these factors must be considered when exercising, during which we require the dog to smell work.

Therefore I repeat: the guide's task is to arouse the dog's interest and to graduate the exercises in such a way, that the dog gains experience as the more and more difficult and complex olfactory tasks are solved. Even a well-trained student should be practiced as often as possible, not only in hunting or investigative practice, but also on track and artificial trail. Only an artificial trace, whose mileage is known, gives the opportunity to control the dog's work and possibly correct it. If the guide knows nothing of the course of the trail, he cannot correct the dog according to his guess, which will usually be less reliable than the canine olfactory organ. The world smells for people, living in a world of shape and color, it is hardly available, therefore the role of a handler is played by the dog. So if we are not completely sure of our judgments - and one can be sure only in a closed experimental field - it is better not to interfere, for the dog's olfactory work, just as a color blind person cannot comment on the shades of different colors.

The ability of dogs to recognize the smell of animals, people, objects or traces have many uses. The olfactory work of a dog can be divided into two different specialties - work on the trail of animals and work on the human footprint. Learning the first of them, consistent with the natural interest of the dog, is easier, both for the animal, as well as for his guide and hunting companion. Just realize, that the primitive dog lived solely on prey, which he found with his nose, and entire generations of domestic dogs have perfected their sense of smell, either by hunting in the company of man, be self-poaching.