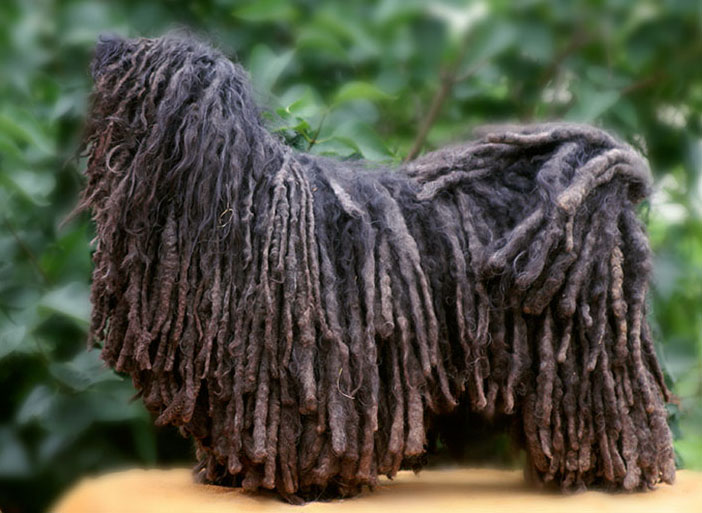 Hungarian pattern entered in the FCI register under the number 55b

He is the original Hungarian herding dog from Asia. He fulfills his task perfectly, not only as a shepherd's assistant, but also as a watchman. Some of the larger specimens have passed the test as service and investigation dogs.

General impression. Medium height dog, with an unpretentious appearance, alive, busy, intelligent, strong build, dry, but well muscled. Square silhouette. It is difficult to judge individual parts of the body, because the whole dog is covered with abundant hair - long, wavy, prone to fulling. The head appears round; the eyes are hidden under the long hair as if under an umbrella. As a result of the long tail thrown over the loin, the torso shows a line rising to the rear. Therefore, just a look is not enough to correctly assess the outline of the trunk. The individual parts of the limbs are also difficult to distinguish.

Head. Little, delicate, round when viewed from the front, and on the side - elliptical. The cerebral part is round. The muzzle is shorter than hers, equal length 35% head length, rounded. Expressive supra-ocular arches. The leading edge is marked. Straight nose, tip of nose relatively large, black. Regular dentition. Scissor bite; lower canines slightly forward, the upper ones are adjacent to them directly. The remaining teeth overlap. Black lips, fit tightly to the teeth. Maxilla and mandible evenly developed and strong. Dark cave eyes, with a straight frame and black eyelid edges. A lively and intelligent look. Ears set halfway up the cerebral part of the head, falling from the root and never rising. Turbinate of the shape of a wide and rounded V.

Neck. Positioned at an angle of 45 ° to the horizontal, medium length and muscular. Due to the abundance of hair, it does not stand out; too clearly marked it is rather defective.

Torso. The height at the withers is only slightly greater than that of the back. Strong spine, creates a gently sloping arc. Chest moderately broad, deep, long; on the front, the front legs are tightly attached to it. Medium length ridge, loins short, ribs well sprung. The back is slightly short and slightly sloping. The lowest point of the torso line is under the rib cage; belly back moderately tucked up.

Front limbs. Shoulders close fitting to the chest. The shoulder blade and shoulder form a right angle. Medium length arm, muscular, running parallel to the longitudinal axis of the torso. The lower end of the humerus is connected by the elbow joint to the underarm. The arm with the forearm forms an angle of 120 ° -130 °; this pond must not be any lopsided, nor bound, nor placed under the body. The forearm is long and straight, vertically positioned; dry musculature. Keep the area below the forearm short and dry. The hock is set at an angle of 45 ° to the horizontal. Short paws, rounded, strong. Nails well developed, black, slate gray color. Hard and flexible soles. Forelegs straight and not too wide apart.

Hindquarters. Thighs and lower legs are long and strongly muscled. The pelvis and the femur form a right angle, femur with lower leg bones angle 100-110 °. A more obtuse angle results in a steep hind leg stance, and the more acute angle - valgus. Dry hock joint, the part below it is short and uniformly dry. The metatarsus forms an angle with the horizontal slightly less than that of the pasterns. The hind legs are therefore longer, claws stronger. Soles hard and flexible. The hind limbs are slightly wider than the forelegs.

Tail. Wrapped, adheres to the loins. The long hair on the tail blends imperceptibly with the hair on the torso.