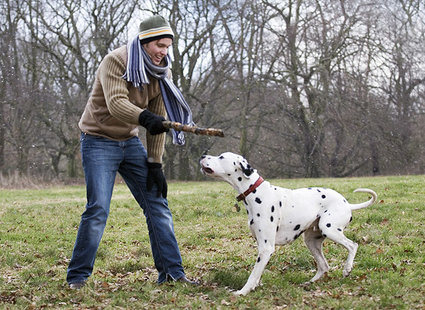 As a descendant of predatory animals, the dog has an innate tendency to chase game and carry the prey to a safe place for consumption, storage for later or feeding the young. Every domestic dog has this natural drive to some degree, and the guide's task is to liberate and preserve him.

A dog will never be made a reliable retriever, if the learning is based on compulsion combined with sorrow. Especially in the beginning, you should refrain from using any coercion, and for further study, resort to it only when necessary and very moderately.

A previously established preaching principle does not apply, that one strong stimulus works better and more persistently than a series of weak ones. This principle is correct, but when unlearning certain activities or forcing the dog to assume a certain attitude or to remain in it. You can only learn from pleasure and awakening your innate instincts.

The handler should forget about it while learning to retrieve, that he is "master”, however, it must become a companion for the dog. It should arouse his instinct to chase and carry prey and keep him in a cheerful mood, avoiding everything, which is depressing for him. So you cannot start this study with your dog too full, sleepy or tired from previous exercises. If it were so, he must first be amused and interested.

Wanting to teach a dog to retrieve relatively quickly, we must first get him accustomed to coming immediately after being called (see the article "Discipline”). You can throw him various carry-around items while you are playing, but I find it risky, because the dog then often gets into the habit of running away with the "prey" from the competing "companion"”. The first exercises are to familiarize the dog with the slogan "aport!”, after which to take the loot. A retrieval trestle is best for such a booty.It consists of two balls or a shield connected by an axis made of soft wood with a diameter of 2-4 cm, depending on the size of the dog. The wood per axis should be soft, so as not to expose your pet's teeth to damage. Hard and slippery, it prompts the dog to contract its jaws tightly, so undesirable retriever in later practice.

Fragile dogs are thrown rubber bones or hemmed the axis of the goat with solid leather. No balls or other small objects are thrown, which the dog, with the enthusiasm of play, might swallow against its will. Also, never use stones or sticks to retrieve, due to their harmfulness to the dog's teeth, as well as to avoid defective associations. In the future because, unable to find the right "loss”, would cope by picking up the first stone or stick to the edge.

At the beginning of learning, only wooden or leather objects should be used for retrieving, which do not arouse any reluctance in the animal. Once it retrieves reliably, you can move on to using less enjoyable items (metal or odorous). Most dogs don't like to retrieve prey animals at all. Therefore, only after reliable retrieval of ordinary game can you slowly retrieve pests.

The exercise dumbbell should be light initially; later, the demands on the dog can be raised by gradually adding lead discs to both sides of the wooden discs. Of course, that only an adult dog and properly prepared training can be required to retrieve heavy objects and possibly overcome obstacles.

But let's go back, to the beginning of learning, We are on a walk, in place of, where neither people, nor do the animals absorb the dog's attention, and we start to play with him. When we make sure, that the dog is not affected by side stimuli, we take out the billy goat and wave it like this,. so that the dog cannot grab it, but be careful, so as not to hit the charge with it. After a while, the dog will feel like catching the prey. Then we throw the billy goat not too far and call "aport!”. Often the dog will obey this command the first time. If it is not limited to catching, but he will carry his spoil, we praise him more vividly and cheerfully call him to us.

Perhaps, a dog excited to chase prey will not heed the call. Then you cannot show the slightest dissatisfaction, lest he abandon his prey, remembering the slingshots, which he got hurt while he was studying discipline. So we repeat the call cheerfully and in order to hasten our return we start running backwards, stepping back and luring the pet with gestures. When the charge comes running in kind, we praise him cheerfully, we stroke and gently take the apport from him with the words "spend!”, rewarding in return with some tasty morsel.