The rock partridge lives on the slopes of the Alps in Italy and the Balkans. She can also be found on rocky naked slopes, in thorny thickets and among other vegetation. The rock partridge is like a mountain replica of the plain gray partridge, which it resembles in size and shape. Both species of partridges eat similarly: animal and plant food.

Red partridge (Alectoris rufa) occurs on the Iberian Peninsula, in the regions, in which its relative is absent - the gray partridge. It differs in the way of nesting, unusual for grouse. Chickens can be polygamous or monogamous. The red partridge is monogamous, but each parent takes on the responsibility of caring for some of the offspring. In the period from May to July, the female looks for a depression among rocks, which he quickly lines with blades of grass. It can bear 20 do 30 jaj, one every day. They are covered with red and brown spots. When she lays half the eggs, leaves them for the male, and she immediately starts building the second nest, in which he lays the rest of the eggs. Chicks hatch after 24-26 days. Of course, the chicks hatch from the eggs incubated by the male a few days earlier. This type of nesting reduces losses so common in ground-nesting birds. 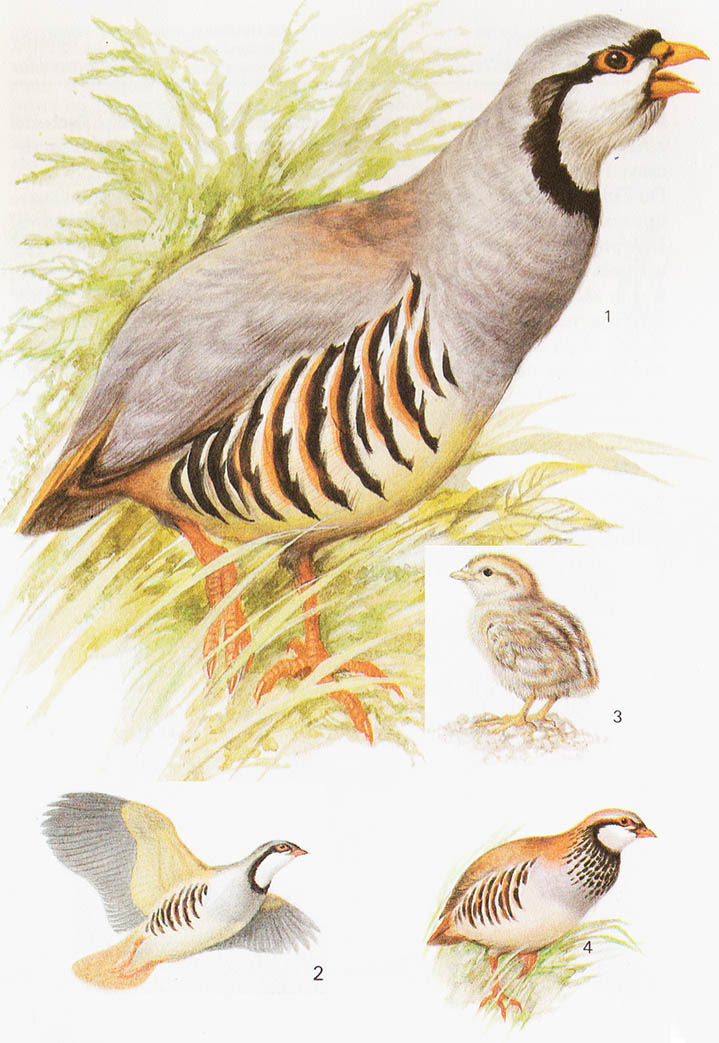 Rock partridge has approx 35 cm in length. The female and the male are feathered in the same way. The backs are grayish, white on the dewlap, a spot framed in black, clearly visible at rest and in flight (2). The sides are black, white and red stripes. The beak and paws are bright red (1). The chicks are covered with a brown-red down with a black-and-white pattern on the back (3).

Red partridge it is very similar to rock not only in appearance, but also from behavior. Her coat is dark, brown red, the black stripe on the chest goes down in the form of black stripes (4). You can see the red lower part of the tail in flight, which distinguishes it from the rock partridge. In some countries, rock partridges are protected, in others, breeding enables autumn hunting. It is valued for its tasty meat.

It does not occur in Poland.