The bone skeleton is the skull, spine, the sternum and ribs, and the bones of the limbs and hoops connecting them to the axial skeleton. The front limbs join the shoulder girdle (collarbone and shoulder blade), and hind limbs with a lumbar belt.

The skeleton of birds is remarkably light. Most long bones are tubular, inside empty; they are connected to air bags in the head and torso. The forelimbs of birds have been transformed into wings that allow them to stay in the air and fly. The peculiarity of the bird's limbs is the bone commonly known as the tarsus (tarsometatarsal bone), to which they are attached, In most cases, four fingers. First finger, thumb, it is usually facing backwards, thus opposite to the other fingers. In some birds, e.g.. dropa, thumb is atrophied, and the walk has only three fingers. The kestrel and osprey have an outer reversible toe: can be directed backwards to strengthen the thumb.

The shape of the bird's leg reveals its way of life. Predatory they have long, flexible fingers ending with sharp claws (spp) allowing them to catch their prey. Waterfowl have fingers connected by an interdigital membrane (ducklings) or surrounded by rigid appendages of various shapes (coot). Birds from cool zones (buzzard, pardwa) their limbs are protected by feathers down to the toes, unlike waders and waders (heron, kszyk, duck), whose limbs are bare down to the tibia. 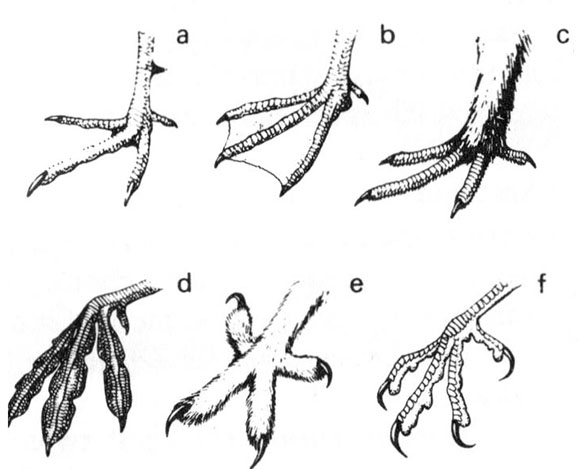 The mammalian skeleton is strong, flexible, but relatively heavy. Unlike other vertebrates, the length of a mammal's neck does not depend on the number of cervical vertebrae (they usually have seven), but on their size. The size and shape of the skull as well as the number and arrangement of the teeth are also distinguishing features. The teeth are incisors, fangs, premolars and molars. Some animals, e.g.. carnivorous, they have complete dentition, which means, that they have four kinds of teeth. Other animals (rodents, hares, hooves) they have incomplete teeth, they lack canines and some incisors. Small mammals are born with milk teeth; their teeth are devoid of molars. Milk teeth fall out after a few months, pushed out by permanent teeth.

Some mammals have specialized teeth. Rodents and hares have both upper and lower jaws (jaw) after a pair of cutting incisors, which are constantly growing, which makes them chew on hard food. Carnivores have very strongly developed canines with a cutting crown, which make it possible to capture and kill the prey. Zygomatic teeth (the last premolar of the maxilla and the first molar of the mandible) they are strong and cutting; the animal easily cuts pieces of meat with them. Some ungulates, e.g.. deer, the canines in the jaw are in a rudimentary state, and in the lower jaw they resembled incisors. In herbivores (hooves, rodents, hares) Molarization of premolars is observed, which together with the molars form an abrasive disc for grinding hard plant food. Some ungulates (boar) the fangs are transformed into weapons (sabers and pipes).

Mammals' limbs correspond to their way of life. They are essentially five fingers (each limb has five fingers). Some terrestrial mammal species, like a bear, borsuk, rodents and man, they are stop-wise, which means, that their foot rests entirely on the ground while walking. Other, thumbtails, they walk only on their toes (carnivorous). The best runners among ungulates have fewer toes and only travel on the members of the third and fourth toes.

Deer antlers are a bone structure. In most cases, it is an attribute of males; female Renna is an exception.

Deer antlers are shed every year. Hormones determine its periodic build-up, and its development depends on such external influences, like food, male health condition and its position in the herd hierarchy. Every year, deer antlers grow on the frontal bones (pots) and it is dropped that same year. The so-called young bull deer grow out of it. awl, formed of vascular and innervated cartilage tissue. During the growing period, they are covered with velvety skin (I figured it out). Antlers ossify from soaking to tips and, unlike the solid horns of the hollow horns, the oldest part of them is on the way, the youngest near the antler tip. When the antlers reach their final size, hardens, the blood vessels become inactive, and the code falls off in patches (the dangling parts of the scissor are the so-called. flags or banners). Deer get rid of it by wiping the antlers on tree trunks. The cleaned antlers are clear, but the sap of the green bark of trees and other external factors give it a dark color. The antlers reach their peak before the mating season, so that the male can impress the doe and fight rivals. After the mating season, the antlers are shed, at the end of the year or at the beginning of spring, and new antlers begin to form immediately.

The tick is held in place by a ring surrounded by a rose. Each time it is dropped from the pole, a new branch grows. The tip of the pole first ends with a fork, then a crown.