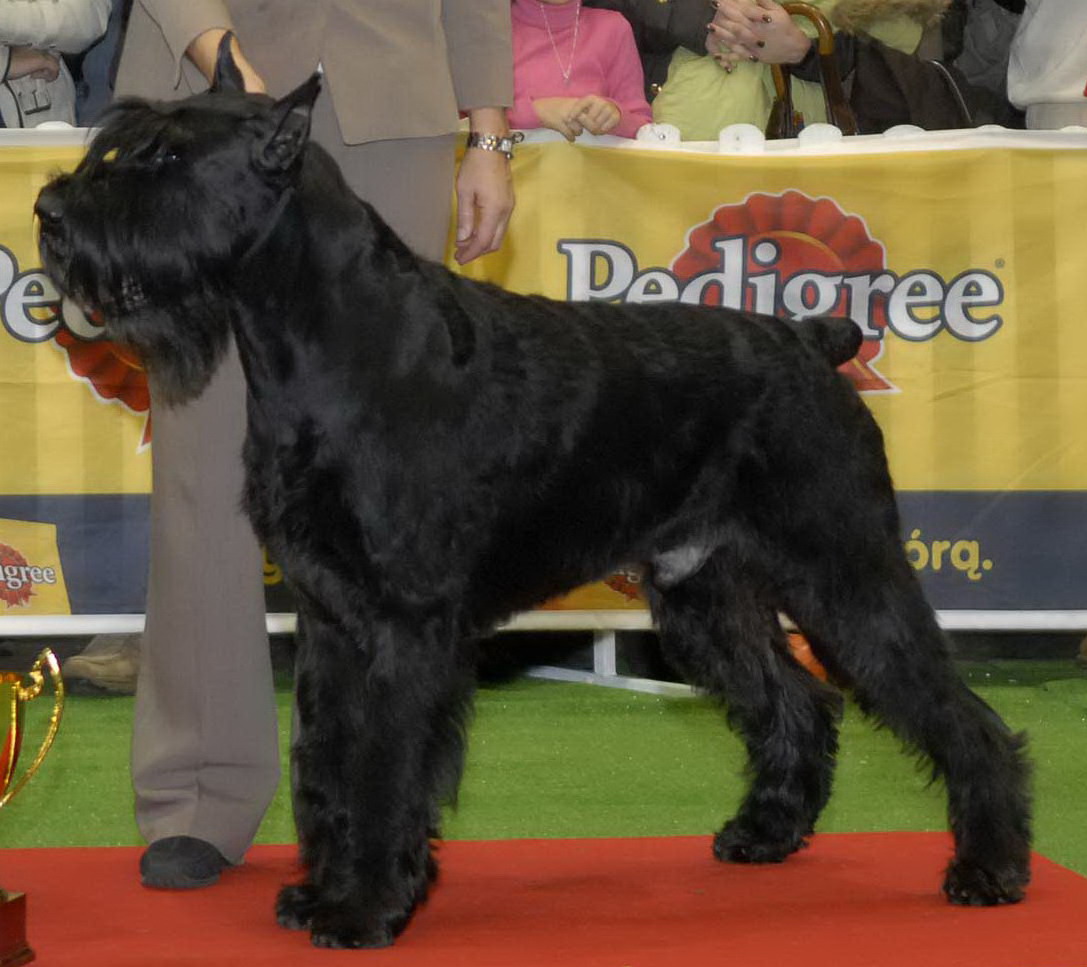 He comes from the vicinity of Stuttgart (Württemberg) and Munich (Bawaria). Dogs of a similar type are found in Dürer's sketches (the end of the 15th century). This type of dog is also recreated in the famous sculpture "Nachtwächterbrunnen” with 1620 r. in Stuttgart. This old breed can be considered a typical country dog ​​of that area. Some German cynologists include this breed in the shepherd-sheep group.

This breed comes in three varieties: giant, medium and dwarf. The last two varieties are included in 9 groups and they will also be discussed there.

General impression. The giant bearded man is an enlarged image of the bearded man (sznaucera) medium. Represents a type of guard dog with a respectable appearance. He is benevolent by nature, possessed, disparate. He has perfectly developed senses, he is persistent, learns easily, shows high resistance to bad weather conditions. All these features make him an excellent working and service dog. It deserves more interest in it in Poland.

Head. Strongly built, longitudinal, tapering gradually from the ears to the tip of the nose. The ratio of its length (from the tip of the nose to the back of the head) from the length of the back (measured from the first dorsal vertebra to the base of the tail) - more or less like 1 : 2. Great importance is attached to the slenderness of the head. Edge. the frontal area is clearly emphasized by the brow bone. The bridge of the nose is straight, runs parallel to the flat line, a smooth forehead. Mandibular muscles strongly developed, however, they should not disturb the angular silhouette of the head (including the beard). The muzzle is shaped like a moderately blunt wedge. The nose is prominent, black. Lips tightly fitting, black (regardless of the color of the coat). Ears set high and evenly cropped. Oval eyes, dark. Lower eyelid tight (conjunctiva invisible).

Neck. A bit bent, firmly seated, proportional (not too short and not too thick), the skin is dry, without folds and tightly fitting. Strong neck, well arched.

Torso. Chest moderately broad, with flat ribs, oval in cross-section, reaching to the elbows. The sternum in the initial part projects as far forward as possible in front of the scapular joint, creating the so-called. parapet. The lower edge of the chest slightly rises to the rear. Belly moderately tucked up. The distance from the last costal arch to the hip as short as possible; it gives the impression of firmness at the withers. Back short and muscular, slightly sloping, with a slight curve towards the slightly rounded croup.

Front limbs. Oblique shoulder. Arm well angulated, flat, but well muscled. The legs are straight when viewed from all sides.

Tail. Set high and carried, trimmed after the third or fourth vertebra. Individuals with a rudimentary tail from birth should have at least one palpable vertebra.

Further details of the pattern correspond to that of the Munich bearded man.