From the end of January, if winter is not too hard, you can hear hoots coming from the parks, thickets, cemeteries or alleys. It is a mating song for the tawny owl resembling the sound of an ocarina and consisting of a series of sounds ,,u-u… lub „u-u-u-u-u . It is a sedentary bird, quite common almost everywhere in Europe, both in the plains and in the mountains. He lives in forests, nests only in hollows of trees and in rotten trees, which are becoming rarer in our forests. Therefore, it is increasingly forced to be content with the old crow's nest, attic or a hole in the ground. He uses wooden nests that are willingly provided to him. It should be constantly practiced by people involved in nature conservation.

In March or April, the first dazzling white and almost spherical egg appears in the nest. (4). A week later, the female stops carrying. Folds 3 do 4 jaj, and exceptionally up to seven. It starts brooding right after laying the first egg, therefore the difference in the hatching of the young is up to 7 days. Discharges 28 days. The youngest tawny owl is the weakest and often dies, because his older siblings do not allow him to eat. Such self-regulation may seem cruel, however, it does provide the ability to survive and reproduce for individuals leaving the nest. 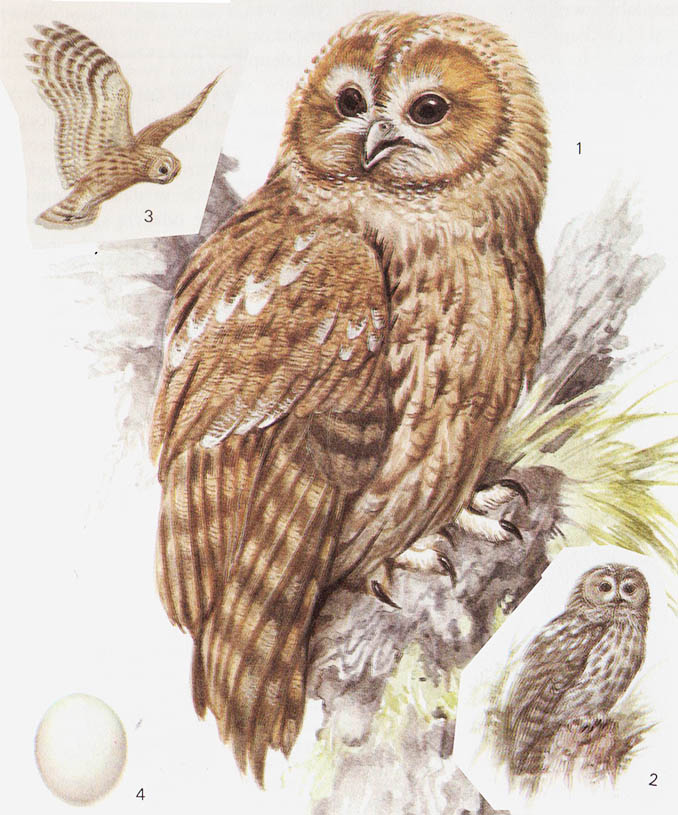 Tawny Owl has approx 38 cm in length. His head is quite big, chestnut eyes. There are two basic colors of plumage: grey (2) and brown (1) with triangular darker spots.

The fluff of the chicks is white, the youth's robe is covered with gray spots. The flight of the owl is straightforward and absolutely noiseless, like all owls. A quiet flight, visual acuity and hearing are essential for nocturnal forest and field mice hunting (3). Tawny Owl is able to locate the sound source from 1% mistake. In the distance 10 m from a crispy rodent locate the place, in which it is located, with an accuracy of up to 17 cm. This accuracy is enough to catch your prey. Protected species.