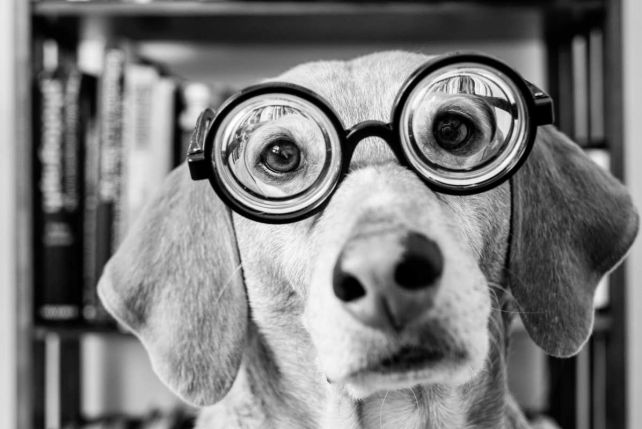 It follows from the examples already given, that eyesight plays a much smaller role in dogs than in humans. The visual sensations then only create the appropriate association in the dog's brain, when their truthfulness is confirmed by smell or hearing, or by both senses simultaneously. A doll or a sculpture (not to mention the painting) being even the most faithful imitation of a human or animal figure in shape and color will not confuse a dog and will not cause associations with the being, which he is to present, if it is not imbued with its fragrance.

No dog can see anything beyond the plane, when she looks at a picture, even the most realistically painted. There are few dogs paying attention to the phenomena reflected in a large mirror. They only do it so much, as long as they were intrigued by the movement of this plane. As soon as the dog becomes convinced, that the phenomenon that appears in the mirror is odorless, it ceases to interest him.

There is no place in a dog's head for impressions caused by seeing forms without a specific smell, which is the most important feature of concrete things for a dog. Such an odorless phenomenon, which cannot be known also by the sense of touch, it is equally unreal for a dog, as for a human an object without shape and color, and even to a lesser degree, for abstract concepts cannot arise in the animal's brain.

Most dogs have much weaker eyesight than humans, but according to racial and individual characteristics, there are individuals with different powers of sight. Greyhounds generally have very good eyesight, but a worse sense of smell. Sheep dogs are endowed not only with a great sense of smell, but with relatively good eyesight. Most individuals with definitely bad eyesight are found among hunting dogs with a perfect sense of smell. Poor vision, if it is not clearly morbid and taken too far, does not detract from the utility of the dog. To some extent, it even helps him with his olfactory work, because the dog's main focus is on the trail or the wind, which provide him with infallible clues. However, it must be noted, that a shepherd or defense dog must have relatively good eyesight, because it facilitates the performance of duties. Dogs also have a much greater ability to perceive objects in motion than motionless ones that blend with the background, on which they appear.

Despite the low ability to recognize objects with eyesight, the dog shows good orientation in low light, because apart from the sense of smell and hearing, his sense of touch helps him in this, also more developed than in humans.