The bison is the largest land mammal in Europe. It lives mainly in vast deciduous forests and mixed forests with the character of primeval forests. There is a clear sexual dimorphism in the external structure. Bulls are heavily built with a more pronounced hump and have a greater body weight in relation to the females. The weight of the males is approx 640 – 920 kg, while the females 320 – 640 kg. Both female and male have horns with it, that in males they are less bent and more widely spaced. The tail ends with long hair. The hair is usually fawn brown, although there are sometimes exceptions. The social structure of the bison varies over time. The herd has approx 20 individuals. In the period from spring to autumn, bisons live in two separate groups formed by the so-called. mixed groups led by an experienced female - cows, calves, "youth 2-3 summer ", periodically adult bulls and groups of adult bulls living alone, in pairs or small groups. Adult bulls join the herd only during the mating season. Wisents have poor eyesight, which is compensated for by an excellent sense of smell, which plays an important role in heat, when male European bison follow herds or when individuals separate from the herd. Young bisons - calves are born in the spring. After about 9 months of pregnancy, the female bison gives birth to one or, less frequently, two young. This represents a small percentage of births especially, that the cow gives birth every two years. When it is time to give birth, the female separates from the herd and goes to the secluded ones, safe place. After time 20-25 minutes, the calf is able to stand on its own and suckle its mother's milk within an hour of giving birth. After a few days, the cow joins the herd with the calf. 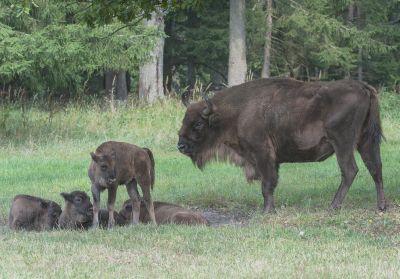 Bison are herbivores and ruminants. Thanks to that, that they do not feed in one place, the vegetation has a chance to regenerate. The basis of their food are grasses and sedges - forest reed, forest and hairy sedge; herbaceous plants - hairy buttercup, vegetable thistle, common nettle, ground elderberry; bark of trees - oak, grab, buk, ash, spruce, acorns and bouquet are a delicacy. In winter, they eagerly use hay and fallen aspen trees left by the pastures. Scientists give different age ranges when it comes to life expectancy. It is accepted, that on average the bison live to age 25, and the bulls about 20 years. The bison is a protected species under both EU and national law. According to the IUCN classification (International Union for Conservation of Nature) belongs to the VU category, that is, a high-risk species. It is also listed in Appendix III of the Bern Convention. It is listed as a priority species in the Habitats Directive (92/43/EWG). In Polish law, it is strictly protected under the Act of 16 April 2004 on nature protection (Dz. U. 2013, No 103 item. 627) and its executive act - the ordinance of the Minister of the Environment of 12 October 2011 r. on the protection of animal species (Dz. U. 2011 No 237, item. 1419).